ASEAN Governance: Is There a Future for Civil Society?

Pundits have been keen to predict that Southeast Asia will soon leave behind its authoritarian past and head toward a more democratic future. This optimism was boosted in 2010 by Myanmar’s decision to “transition” to democracy, allowing for elections and assigning a role to the opposition.

In spite of persistent doubts about the genuineness of these efforts, most would subscribe to the World Bank Governance Index, which shows that exponential progress has been made in expanding accountability and the voice of civil society from 2010 to 2015.

But look at Myanmar’s neighbors now. Ironically, the nations that were considered the most advanced in democratic terms are now in turmoil. The Philippines is eulogizing its former dictator and seems to have shelved humanitarian principles and the rule of law to carry out extrajudicial killings in an ill-conceived “war on drugs”.

Thailand has seen a series of elected governments brought down and is now under military rule. Malaysia’s prime minister, accused of embezzlement on a massive scale and who is extremely unpopular, maintains his grip on power through the weakening of the judicial system. And in Indonesia, the principles of Pancasila, of “Unity in Diversity”, and of inclusive governance and reform are under threat from various quarters.

In the other countries of Southeast Asia centralized governments of diverse ideological orientation remain well in control. Opposition there is marginalized, the judiciary cannot operate independently, the media and the internet are subject to restrictions and activists are at risk of being charged or harassed.

In this climate, civil society seems at a loss. The space for human rights groups and other non-governmental organizations is shrinking due to ever more elaborate administrative and legal barriers and to limitations on public gatherings and freedom of expression. Civil society itself is fractured and there are questions about its accountability and legitimacy and the effectiveness of the strategies employed.

The escalating tensions are exemplified in the strained relationship between ASEAN and civil society. Historically, it has taken time for the former to appreciate the role of the latter in the region’s development. Finally, in 2008, the ASEAN Charter formally recognized civil society engagement as vital to the political, economic and sociocultural communities that constitute the three pillars of ASEAN.

Mechanisms were created for civil society to formally interact with ASEAN, foremost among them the ASEAN Peoples’ Forum and a number of commissions devoted to specific topics and groups such as on human rights, on women and children’s rights and on migrants.

This encouraging, albeit limited, interaction experienced a setback this year, though. Unlike in the past, the ASEAN People’s Forum was not held in conjunction with the ASEAN Summit in Laos out of concern for the restrictions that country puts on freedom of speech, and it was held instead in Timor Leste, not yet an ASEAN member. In a parallel move, the usual interface of ASEAN leaders with civil society organizations was dropped from the summit.

The nature of the commissions and the forum itself has also come under scrutiny due to concerns among civil society that government-sanctioned representatives and former bureaucrats increasingly fill the commissions and that the forum is at risk of being co-opted. As Malaysian human rights defender Charles Hector said recently in Bangkok at a panel on ASEAN governance organized by the Southeast Asian Junction in collaboration with the Heinrich Böll Stiftung, the forum initially served to bring many civil society groups together to discuss and formulate a common advocacy statement to be handed over to ASEAN.

However, in the last two forum meetings in 2015 in Kuala Lumpur and 2016 in Timor Leste, the statements were sent to ASEAN even before the participants arrived and they were “very ASEAN-friendly”, no longer daring to highlight wrongs or make specific demands. In Hector’s view the forum has become more a venue for ASEAN governments to speak to civil society rather than the other way around.

ASEAN has become more bureaucratic and selective in deciding which civil society groups it will engage with. While the ASEAN Charter does not differentiate between “natural” and “juridical” civil society organizations, recent accreditation rules demand the submission of registration papers and financial statements, thus de facto excluding “natural” organizations that lack such documentation — usually advocacy and human rights groups. Rather than entertaining genuine dialogue on different views, ASEAN seems to prefer to hear from interlocutors whose views on development conform with its own.

At the same time, civil society groups are struggling to find an effective strategy to engage not for the sake of engagement itself but to change society for the benefit of the weak and excluded and without compromising their principles to please ASEAN governments.

For change to occur, all member states without exception have to acknowledge that the promised realization of a “people-oriented” community implies respect for diverse views and the representation of the diverse constituencies that compose the region.

Such a unanimous acknowledgement seems as remote as ever, however. Just a few months ago, many had hoped that the shift of ASEAN chair to the Philippines would signal better times for ASEAN-civil society interaction; in the current rights-averse climate (and the recent Trump victory in the US), that seems unlikely.

The writer is associate professor at Mahidol University, visiting professor at Chulalongkorn University, Bangkok, and emeritus regional director for Southeast Asia with the Rockefeller Foundation and the International Development Research Center. 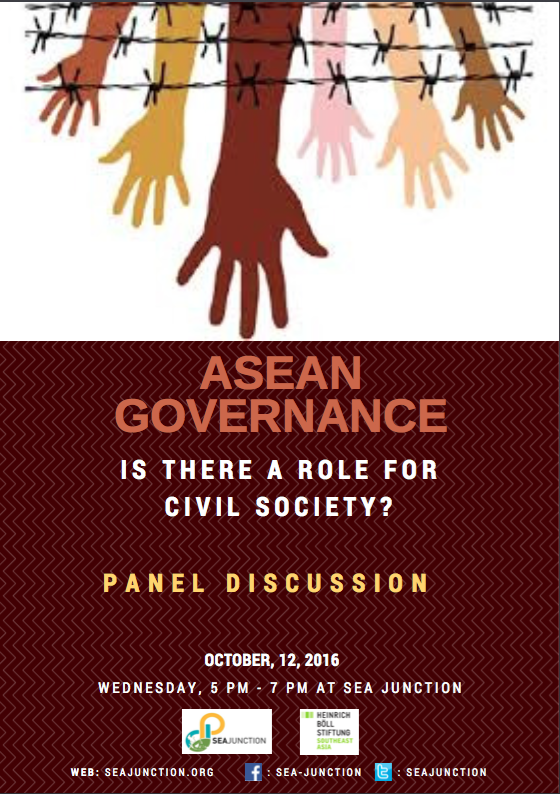