On 12 and 13 May, SEA Junction will host a unique contemporary wayang (shadow puppet) play by Indonesian artist Jumaadi (see bio below) in collaboration with the “Shadow Factory” collective of East Java. There will be 4 performances, twice every afternoon at 2 -3 PM and at 5.30-6.30 PM, while in the morning there will be workshops on making contemporary wayang 11.30 AM – 1 PM. 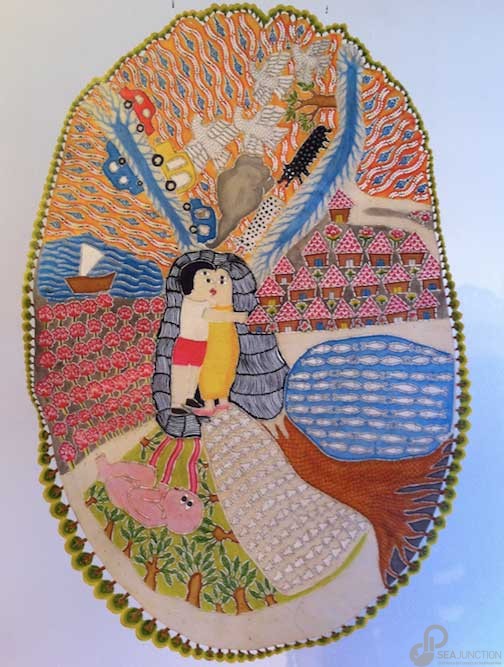 The play entitled “The Well and the Gold Nugget” is inspired and brings to life the true story of villages in Sidoarjo, East Java swallowed by mud. Homes, places of worship, schools, playgrounds, small rivers, rice fields, historic sites and thousands of memories were buried forever. Many varieties of indigenous plants and animals also became extinct. Community social structures broke down and villagers lost trust amongst themselves, particularly over the issue of compensation for their loss. This incident – which occurred on a mythical scale in 2006 – was the result of a technical fault by the mining company which to date has yet to find a way to stop the never-ending flow of mud (see https://en.wikipedia.org/wiki/Sidoarjo_mud_flow).

In the wayang performance the fantasy story is told of the Bongol family who have a well of natural water near their house. One day a paranormal predicts that there is a gold nugget the size of a human head in the well.  However, before the nugget is removed, an offering of one buffalo and nine pure white chickens must be made to a spirit family which inhabits the well. Initially, the villagers agree to leave the gold nugget alone. Though eventually one of the village elders agrees to follow the advice of the paranormal and remove the gold. Extracting the gold from the well requires heavy equipment, for neither human or supernatural powers are strong enough. Once the heavy equipment is deployed at the well, the water turns saline and the villagers begin to panic. Not only is salt water coming out of the well but the water is mixed with oil. Eventually mud begins to erupt from the well and floods their rice fields and other crops, and begins to seep into their houses, first to knee height, then higher and higher till the homes are buried. The constant flow of mud even rises to the roof of their mosque, so that only the dome is visible, and even that is finally swallowed along with several villages and their memories.

The performance in English language relies very little on verbal language or narrative in an attempt to encourage the audience to appreciate and interpret the pictures and sounds created specially for this show. The wayang are made from paper, recycled cardboard, animal hide; some are cut and chiseled to produce detailed images while others are roughly and spontaneously shaped. These forms are then performed using an overhead projector as the light source. Fleetingly this wayang performance bears a resemblance to silent films or appears like a series of drawings shown one after the other as if in a slide show.

For the SEA Junction performance, Jumaadi is the artistic director and shadow puppet performer. He is accompanied by the music of Shadow Factory, based at Rumah Kayu Pecantingan in Sidoarjo, East Java. The members of Shadow Factory are composer Suwandi Widianto, musician Catur Fredy Wiyogo and production manager Meteor Amang Rosada.

About the Artist:
Jumaadi was born in Sidoarjo in East Java, Indonesia, in 1973. Recipient of the inaugural John Coburn Emerging Artist Award in 2007, he earned his MFA the following year from the National Art School in Sydney, Australia. His work spans a variety of mediums, including painting, drawing, sculpture, poetry, photography, and performance. He has held residencies and presented his work all over the world, including Malaysia, China, the US, the Netherlands, and different parts of Australia and Indonesia. In 2013, he was selected as one of five artists to represent Australia at the Moscow Biennale of Contemporary Art. These days, Jumaadi largely divides his time between Australia and Indonesia. (text from https://www.asymptotejournal.com/visual/tiffany-tsao-jumaadi-art-as-vehicle-to-connect/ )

NB: For the workshops, registration is required and there is a charge of 150 TBH (inclusive material)

Performances are free, but donation most welcome! 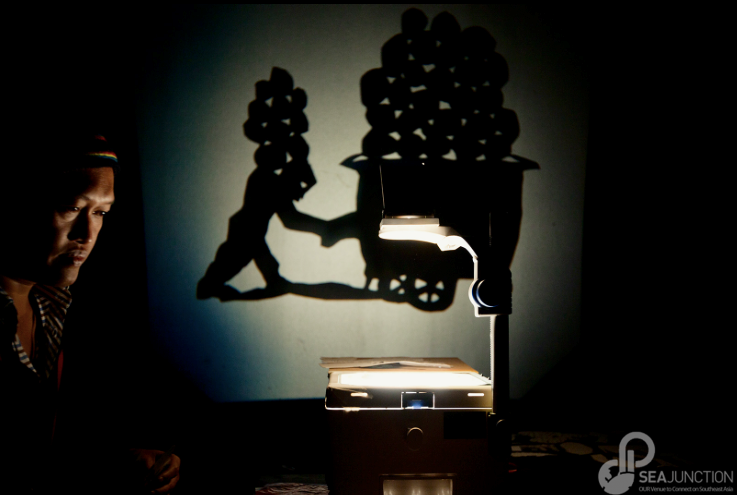 Jumaadi and his shadows. Photo by Tiffany Tsao in Asymptote (link above)