Dialogue Forum 8 (in Thai) The Environmental Challenges under Thailand’s Constitutions: Progress and Setbacks

Protection of natural resources and the environment as well as access to the resources have long been an issue no less critical than politics or economic issues. To say the least, the issue itself is political.

However, it had hardly been enforceable and materialized due to the lack of legal mechanisms to support it up until it was scrapped due to the coup in 2006.

The 2017 Constitution is seen as another attempt to address the issue. This time it has tried to materialize people’s rights with more concrete approaches; be they stating firmly the rights guaranteed by the Constitution, stating the duty of the state to fulfil such the task for the people, stating several prime environmental issues to be tackled under the state’s policies, and last but not least, stating natural resources and environmental management as part of the reform’s efforts.

As pointed by some constitutional drafters, all these are meant to help secure people’s rights over the resources and the environment as supposed to be.

Still, some flaws and loopholes are observed, particularly the point that what addressed in the Constitution have rather steered the efforts backwards, while failing to keep up with rapid change.

When there are growing calls for a major amendment of the 2017 Constitution, it would also be a good time for concerned parties to look back what has been attempted to as much as what has been achieved and failed, regarding our natural resources and environment, and find the best way to address them together for the best interests of the country and the people at large as a new opportunity is provided as such.

The Dialogue Forum, therefore, would cordially like to invite you to explore the way to address natural resources and environmental management fort the best interests of the country and the people in this challenging time in its Dialogue Forum 8: The Environmental Challenges under Thailand’s Constitutions: Progress or Setbacks at SEA-Junction 408, Bangkok Art and Culture Centre, on November 24, 2020 (4.30 pm-7 pm).

**In accordance with the COVID-19 regulation, please confirm your participation ahead of the event (limited seats available). 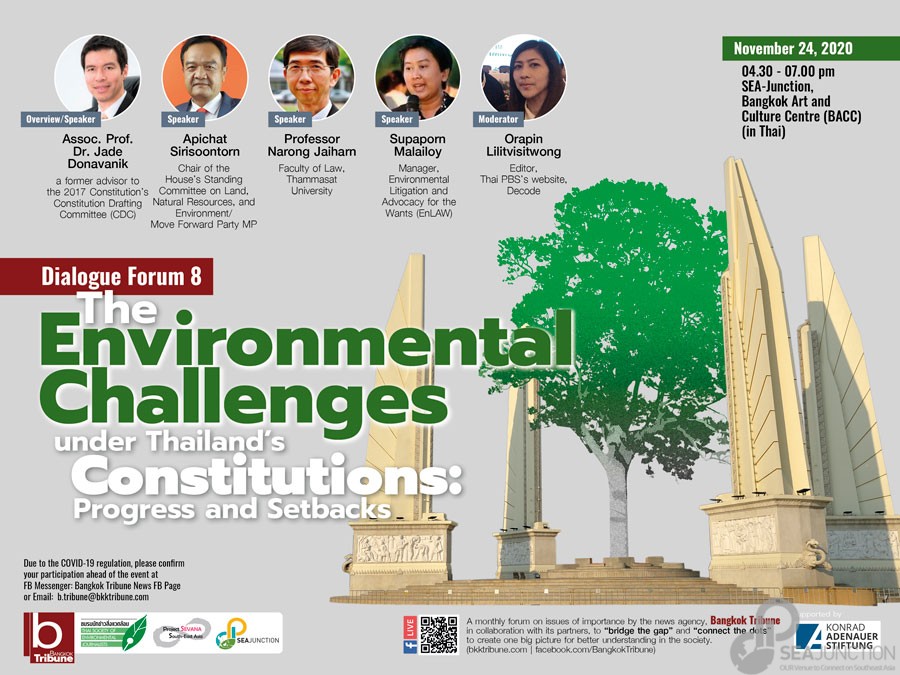