Globally, trade in fish products continues to reach record highs, and developing countries now contribute over half of the value of total exports. Within this expanding world market, Thailand has emerged as a major supplier, with the value of its seafood exports reaching US$6 billion in recent years. A significant contribution to the industry’s growth is given by the migrant labour force. Shortages of Thai workers willing to work on fishing vessels, emerging simultaneously with expanding structural differences in population demographics and economic development between Thailand and its neighbouring countries, have transformed fishing crews to predominantly consist of migrant workers from Cambodia and Myanmar. Several hundred thousand women and men migrant workers are now employed at different levels within the seafood supply chain in Thailand, working precariously under various temporary labour migration regimes and precarious living and work conditions.

Organized by SEA Junction in partnership with International Labour Organization (ILO)’s Ship to Shore Rights South East Asia funded by the European Union, the photo exhibition gives, as the title says, a glimpse of “Migrants’ Labour & Lives in Thailand’s Blue Economy.” In particular, the photos taken by Thailand-based photographer John Hulme over the course of a decade focus on the two major fishing and sea-processing locations Rayong and Ranong with a majority of workers from Cambodia and Myanmar. They show the migrant’s faces, community life, their work from shore to vessels and the gender distribution of labour with women carrying the double burden of unpaid household work and full-time employment in seafood processing jobs. In their humanity, the images ask questions about how to better protect these fellow human beings and integrate them in our societies.

Curated by Lattapol Jirapathomsakul and Rosalia Sciortino, the exhibition is held on 6-7 September 2022 as part of the Fair Seas Labour Conference (https://fairseaslabourconference.org/), a sub-regional conference of the SEA Forum for Fishers, at Infinity8 Bali Hotel, Indonesia. 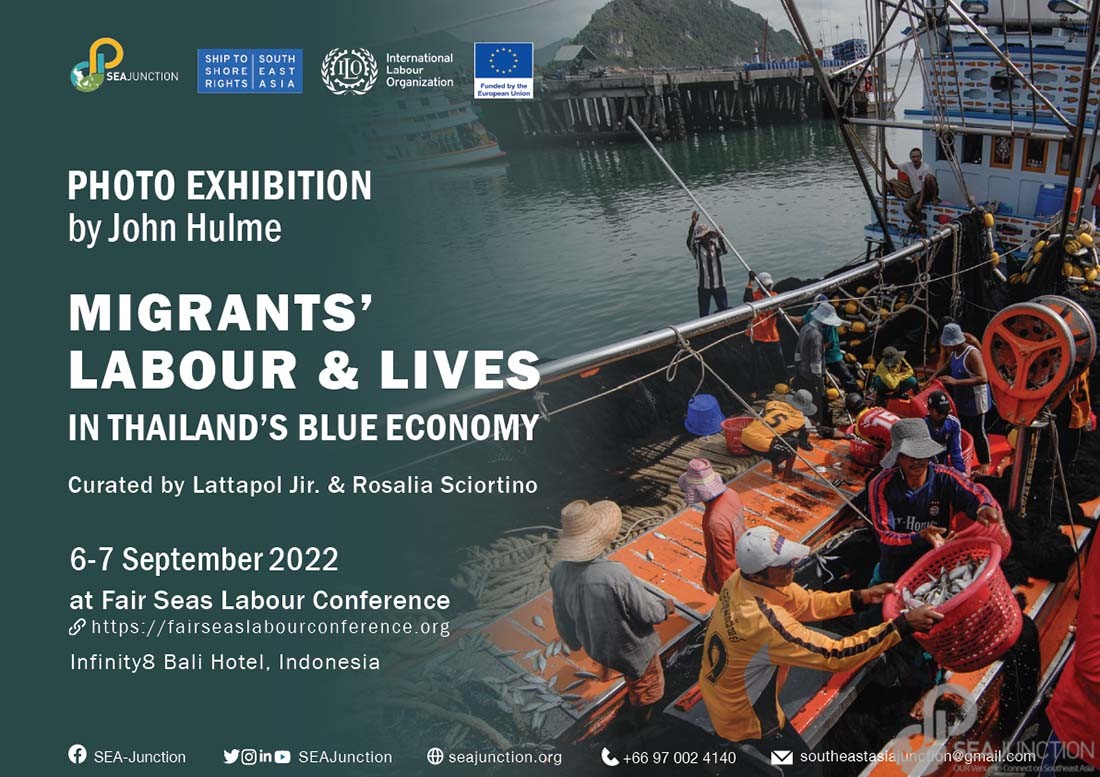 John Hulme is a documentary photographer dividing his time between South East Asia and Britain. His work has focused on documenting social issues in Europe, Thailand, Burma and India. His work has been published in books, magazines and newspapers, including AOL, Oxford University Press, Cambridge University Press, Financial Times and The Sydney Morning Herald. As an accredited photographer for the BBC and Channel Four he has been involved in the production of several documentary. Recent work includes the documentation of Burmese migrant workers, the Karen people of Burma, including their military wing, the Karen National Liberation Army (KNLA) and gold mining in Kachin state.

SEA Junction, established under the Thai non-profit organization Foundation for Southeast Asia Studies (ForSEA), aims to foster understanding and appreciation of Southeast Asia in all its socio-cultural dimensions, from arts and lifestyles to economy and development. Conveniently located at Room 407-8 of the Bangkok Art and Culture Centre or BACC, SEA Junction facilitates public access to knowledge resources and exchanges among students, practitioners and Southeast Asia lovers. For more information, see www.seajunction.org, join the Facebook group:  http://www.facebook.com/groups/1693058870976440/ and follow us on Twitter and Instagram @seajunction

Ship to Shore Rights South East Asia is a multi-country, multi-annual initiative of the European Union (EU) and the United Nations (UN), implemented by the International Labour Organization (ILO) in collaboration with International Organization for Migration (IOM) and United Nations Development Programme (UNDP). Its overriding objective is to promote regular and safe labour migration and decent work for all migrant workers in the fishing and seafood processing sectors in South East Asia. ​​ More information, see https://shiptoshorerights.org/