To launch the research study, “From the Rice Paddy to the Industrial Park: Working Conditions and Forced Labour in Myanmar’s Rapidly Shifting Labour Market,” SEA-Junction and Rapid Asia will organize a panel discussion on 23 October 2021 at 5.00-6.30 pm. At the panel, speakers will share the key findings of the reports as well as discuss the state of workers’ rights in Myanmar since the military coup d’etat last February.

Working conditions in Myanmar’s labour market faced decades of neglect under authoritarian governments, contributing to a laissez-faire system where employers unilaterally set the terms of employment for their workers and labour rights were neither adequately established under law or respected in practice. At the same time, underdevelopment caused by isolation from the international community and a regime of strict economic sanctions meant that there were insufficient decent job opportunities available.

Since a wide-ranging political and economic liberalization process was initiated in 2010, intensive efforts at reforming Myanmar’s outdated, contradictory and vague labour legislation were made. Among the key changes were the introduction of a minimum wage, legalization of labour organizations, establishment of processes for dispute resolution, adopting higher standards for occupational safety and health and expansion of coverage by social security.

However, government and private sector sensitivities about research related to working conditions meant that few rigorous large-scale studies were undertaken to determine the impact of the legislative changes on workers themselves. Ten years after the reforms began, the Livelihoods and Food Security Fund conducted a survey of more than 2,400 workers to help fill the knowledge gap by assessing how effective the improved labour governance framework has been in ensuring decent working conditions. In particular, it represents the first major study of the prevalence of forced labour in Myanmar since 2015.

The report was launched in August 2020 and research was conducted mostly before the coup, but in the discussion speakers will also reflect on the present conditions. The actions of the Tatmadaw now suggest a return to more openly exploitative employment practices and suppression of worker organizing. Indications are that the return to military rule has already begun to roll back many of the hard-fought gains made in expanding labour protection during recent years. As part of cracking down on resistance to its seizure of power, the Tatmadaw has now declared numerous trade unions and labour rights CSOs to be “illegal labour organizations”, creating a blacklist and attempting to arrest many leading labour advocates. This targeted persecution represents a major threat to workers’ rights in Myanmar.

For those interested, the full report can be found here. 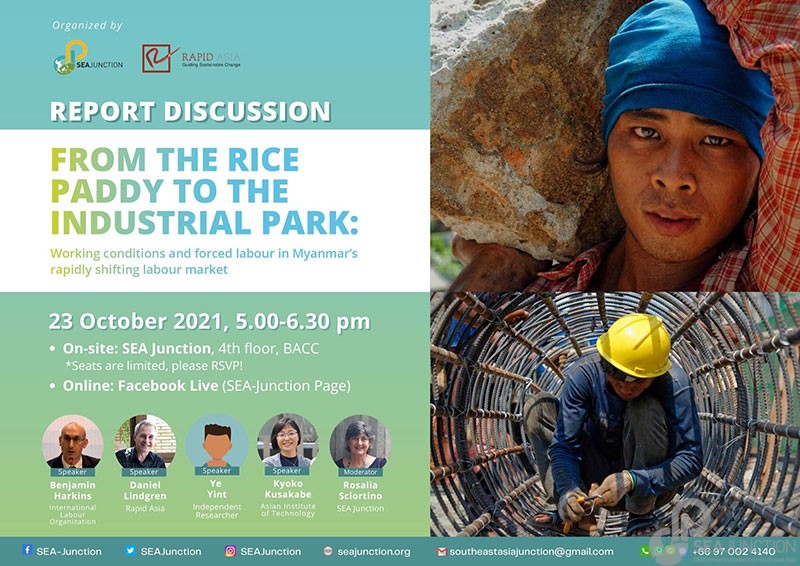 The event will be blended both on site and off site. Please note that in view of COVID-19 measures, seats are limited and reservation is required. You can reserve your seat(s) by email southeastasiajunction@gmail.com, phone/wa: +66970024140 or our social media channels.

For those who cannot attend the event, it will be available on Facebook live streaming.

Event is free, but we count on donations in these challenging times!

SEA-Junction, Our Venue to Connect on Southeast Asia

SEA-Junction, established under the Thai non-profit Foundation for Southeast Asia Studies (ForSEA), aims to foster understanding and appreciation of Southeast Asia in all its socio-cultural dimensions- from arts and lifestyles to economy and development. Conveniently located at Room 408 of the Bangkok Arts and Culture Center or BACC (across MBK, BTS National Stadium), SEA Junction facilitates public access to knowledge resources and exchanges among students, practitioners and Southeast Asia lovers. For more information see www.seajunction.org, join the Facebook group: http://www.facebook.com/groups/1693058870976440/ and follow us on Twitter and Instagram @seajunction

Rapid Asia Co., Ltd. was founded in February 2010 and is registered in Thailand. Rapid Asia specializes in social research and monitoring and evaluation (M&E) consulting, helping clients to find evidence for change, whether changes in policy or beneficiary behaviour. Rapid Asia’s vision is to help social development clients to achieve sustainable change, anywhere in the world. Change, whether to change policy or beneficiary behaviour, requires evidence. Only clear and convincing evidence can help to push for change or to prove that real change has taken place. The key to our success has been to tackle complex problems by coming up with simple solutions. For more information: www.rapid-asia.com and follow us on LinkedIn, Twitter and Facebook