Kucumbu Tubuh Indahku (Memories of My Body) is a 2019 Indonesian drama film directed and written by Garin Nugroho and produced by Ifa Isfansyah. The film, inspired by the life of dancer and actor Rianto, portrays the story of a male dancer who becomes a young performer of Lengger (traditional Indonesian dance), and explores his sexuality. The flow of the film is divided into four chapters telling about Juno’s life journey: starting from his childhood, adolescence to adulthood and the process of discovering his own identity. His own name shows two sides of a coin, a tough prince baby a Pandu and Kunti in the Mahabharata epic and a fragile or gentle child who is struggling to solve the secrets of his emotional impulse and sexual orientation. Throughout the film, Garin articulates the concept of masculinity, the freedom of expression among LGBTQI+ and the reaction from the local communities in this particular case in Indonesia.

The film was first shown at the 75th Venice International Film Festival then screened at the Nantes Three Continent Festival. In Indonesia, this film was first screened at the Jogja-NETPAC Asian Film Festival. During its early screening, the film did not encounter any significant obstacles, but later radical groups organized boycott of screening content in various locations including in West Sumatra, Palembang, Pekanbaru or West Kalimantan. Nonetheless, the film was declared the best film at the Piala Citra Festival Film Indonesia (FFI) 2019, the main film award in Indonesia.

Thank you to the collaboration with the production company, Fourcolours Fim, SEA Junction, GusDurian Thailand, and SEA Studies and Kawan Film of Thammasat University (TU) will be able to host two screenings of this important film. The first on 17 March at 5 PM will be held at TU Tha Prachan (Rewat Buddhinan Room, Floor U2, Pridi Panomyong Librarya), while the second will be held on 4 April at 5PM at SEA Junction, Room 408, 4th Floor, BACC. 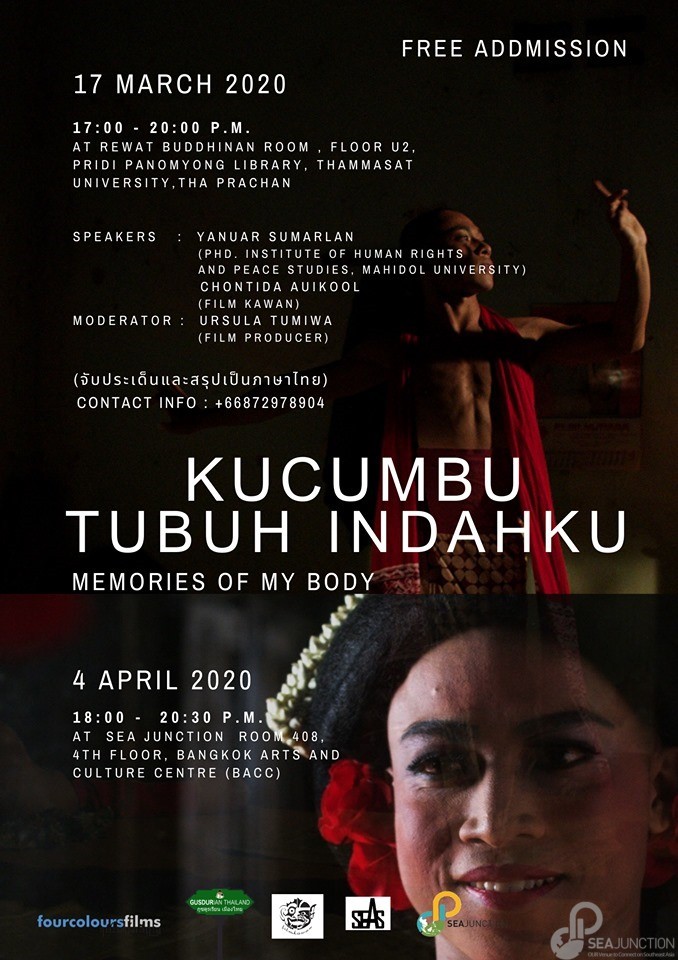 SEA-Junction, Our Venue to Connect on Southeast Asia

SEA Junction, established under the Thai non-profit Foundation for Southeast Asia Studies (ForSEA), aims to foster understanding and appreciation of Southeast Asia in all its socio-cultural dimensions- from arts and lifestyles to economy and development. Conveniently located at Room 408 of the Bangkok Arts and Culture Center or BACC (across MBK, BTS National Stadium), SEA Junction facilitates public access to knowledge resources and exchanges among students, practitioners and Southeast Asia lovers. For more information see www.seajunction.org, join the Facebook group:  http://www.facebook.com/groups/1693058870976440/ and follow us on twitter and Instagram @seajunction

JKT was established at the National Forum GUSDURian last August in Yogyakarta to expand to Thailand the vision of the GUSDURIAN Network Indonesia (GNI), a network consisting of thousands of grassroots-level activists in more than 100 cities in Indonesia