For Urban Asylum Seekers, Uncertainty is the Certainty 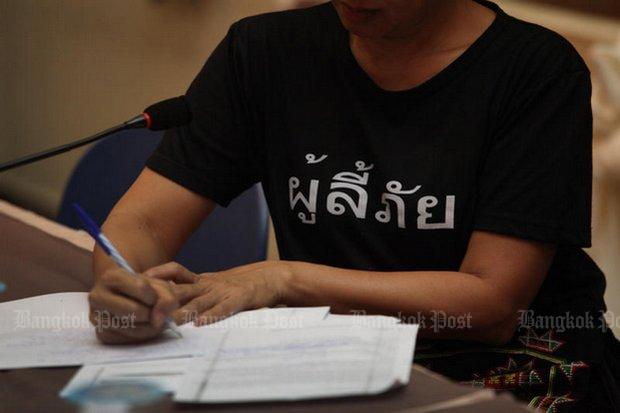 A participant wearing a T-shirt emblazoned with ‘Refugees’ makes a note at a forum on the condition of refugees along Thai borders in Jan this year. (Photo by Thiti Wannamontha)

Waiting, perhaps for something, perhaps for nothing much, perhaps tomorrow, or perhaps never. Being in a permanent state of uncertainty may well be what life is for many urban asylum seekers in Bangkok and other cities in Southeast Asia.

After fleeing for reasons that range from wars to religious and ethnic persecution from places like Pakistan and Somalia to Cambodia and Vietnam, they are far from safe or secure while waiting for the results of their refugee-status applications. This can take years, even decades, as doors to resettlement countries remain shut.

Urban asylum seekers and refugees live in urban settings like the Thai capital, but some rarely go out of often-shared apartments, wary of calling attention to themselves.

Many worry about being reported to the police and ending up in detention, as has happened to others. Low-profile non-government groups give support ranging from information about refugee status determination by the United Nations High Commissioner for Refugees (UNHCR) to Thai-language classes to counselling. Catholic churches arrange donations for them.

In Indonesia, asylum seekers have found that the initial warm welcome can turn to resentment as locals ask why they are getting support and financial help. “They really have very little options,” said a staffer with a civil society group in the Thai capital that assists asylum seekers. “If they are recognised [as refugees], the wait is indefinite because there are no longer resettlement places for 99% of refugees. Many know they will not ever be resettled. In this case, they need to wait until the situation in their home country changes,” said another staffer, who asked not to be identified.

It is bad time to be a refugee or asylum seeker. Less than 1% of refugees worldwide are resettled each year, says the United Nations. At the same time, the number of displaced people worldwide has peaked at 65.6 million, of which 22.5 million are refugees, says the UNHCR. More than half of refugees live in urban environments, instead of a designated camp.

Since the urban asylum seekers waiting it out in Southeast Asia have nowhere to go, what were meant to be transitory stays are increasingly approaching permanent ones. Meantime, they are falling through the cracks created by the lack of legal frameworks that could provide safer humanitarian space for their stay.

“This situation is not really providing a durable solution for anybody, if you are a refugee or asylum seeker. That’s actually the problem in Southeast Asia,” Rafendi Djamin, Indonesia’s former representative to the Asean Intergovernmental Commission on Human Rights (AICHR), said. He cited the rise of right-wing politics in Europe. Despite being state parties to the United Nations 1951 Refugee Convention, they are closing all the doors, even reducing the funds for the UNHCR.

Asean countries have mostly been transit nations instead of resettlement countries for refugees. Only two Asean states, the Philippines and Cambodia, have ratified the Refugee Convention. But the countries with more asylum seekers are Malaysia, Thailand and Indonesia, which are not parties to the convention and thus do not provide legal recognition or protection to refugees.

Asylum seekers in these countries fall under whatever national laws or guidelines are in place there, if such exist. Government officials, often unfamiliar with their situation, treat them as undocumented migrants or visa overstayers.

“Technically under the law [in Thailand], refugees are not even recognised as a separate category of persons, so they are just illegal migrants to the Thai government,” explained a worker with a group that supports urban asylum seekers. Visa violations are often the reason for their detention.

Since Thailand, as with Indonesia and Malaysia, are not parties to the refugee convention, it is the UNHCR — instead of the governments — that screens asylum seekers’ applications for refugee status that would qualify them for resettlement in a third country.

It has thus become the norm for urban asylum seekers in Southeast Asia to get stuck in a region that does not recognise, protect or accept refugees, but still have to deal with them in their midst. States may not sign up to the Refugee Convention, but this does not make urban asylum seekers disappear — or the human rights issues their situation raises as well as everyday concerns like livelihoods, and better integration into communities.

Organisations such as Asean have not made much headway not only due to their hesitance to take in refugees, but because having only two of 10 member states as parties to the Refugee Convention means it cannot formally become an area of work that triggers discussions by, say, Asean nations’ ministries of social welfare, or even AICHR.

“There is no inter-governmental organisation focusing on protecting refugees [in the region],” Mr Rafendi pointed out.

But in recent years, Southeast Asian governments have had to take realistic steps to address the situation of asylum seekers and refugees in a way that may offer them more legal protection even without ratifying the Refugee Convention.

In 2016, the Indonesian government issued a presidential regulation on the handling of refugees, one that defines them in line with the 1951 convention and provides for their rescue and disembarkation in distress.

In January 2017, the Thai Cabinet issued a resolution towards the passage of a law setting up a national screening mechanism that will cover urban asylum seekers and give them the right to work during the refugee application process. “There have not yet been improvements in the law, but we can see there has been a change in thinking in parts of the government,” explained one case worker who works on asylum issues, adding: “The best we could hope for would be for a refugee law to be passed within the next 12 months, which allows a long-term visa for refugees as well as work rights, right to education, and right to be part of a similar health insurance scheme as the migrant workers in Thailand.”

“Once implemented, UNHCR hopes that the Thai screening mechanism will clearly establish the criteria and methodology for deciding who is and is not a refugee and outline appropriate terms and conditions for their stay in Thailand pending long-term solutions,” UNHCR spokesperson Hannah MacDonald said in an emailed reply.

Mr Rafendi suggests exploring existing regional venues not only through Asean, such as the Bali Process on People Smuggling, Trafficking in Persons and Transnational Crime, where he says there is “increasing, incremental” awareness that addressing the issue of trafficked people, as well as asylum seekers and refugees that may be among them, entails better ways of protecting their rights.

With 45 countries from the Middle East to the Asia-Pacific as voluntary members, with some UN agencies, the 16-year-old Bali Process is an inter-governmental forum — co-chaired by Indonesia and Australia — that facilitates discussion about human trafficking and smuggling.

While the law is not everything, it helps. Thailand’s ratification of the UN Convention on the Rights of the Child, and commitment to “Education for All” ensures that universal education is available to all children, regardless of legal status. Yet a challenge remains. It will likely take some years for Thailand to work out a law on the national screening of asylum seekers and refugees.

This is especially so if one looks at its still-ongoing effort to produce laws and measures to clean up its record in human trafficking over the last decade — and in learning to include civil society and humanitarian groups in this campaign.

One case worker said: “Just because Thailand has not signed the Convention, does not preclude them from possibly passing a robust refugee law.”

Johanna Son is the Bangkok-based editor of the Reporting Asean programme/series. This feature is part of SEA Junction and TIFA Foundation’s series on the ‘displaced and uprooted’ in the region.