A trail of Buddhist heritage

The stupa is a form of Buddhist architecture meant for containing the relics of the Buddha. Originated from India, the stupa is usually designed in the non-enterable circular burial mound topped by the honorific multi-tiered parasols. In later periods, the simple form of the early Stupas became more elaborated with mouldings.

In Southeast Asia’s predominantly Buddhist territories, including Cambodia, Laos, Myanmar and Thailand, temples are beautified with various styles of stupas, and also other countries still show ancient stupas admired for their beauty. In some periods of Southeast Asian’s history, the stupa was the main point of worship, even more important than Buddha images in some cases, and a testimony to the history of societies and people in the region. The series shows the variety of stupa styles to be found in Southeast Asia. To complement the short captions, additional information on those styles is provided here:

1st photo: Dvaravati art is the first period of indianization in Thailand. The stupas of this period, reflect the close relation to Indian architecture of the Gupta and Pala period indicating the religious connection between these regions during the 6th-9th centuries.

2nd photo:  Javanese art. The Borobudur temple near Yogyakarta in Central Java is an example of Mahayanist stupa in Southeast Asia. In Mahayanist concept, the stupa represents the essence of the primordial and celestial Buddha, as well as the formless depiction of the Buddha whose essence is formless.

3rd photo: Burmese art. The most important stupa of Pagan is Shwezigon, constructed by King Anawratha and and still worshipped nowadays. Its Burmese style remains a model for contemporary stupas.

4th photo  Mon art The  kingdom of Mon was in today lower Burma. The most significant Mon stupa is Shwedagon, which contains the hairy relics of Buddha. It is believed that Mon merchants were the first people to meet Buddha immediately after his enlightenment and brought these relics to their homeland.

5th photo: Thai art: In northern Thailand, the great Stupa is called Chedi Luang while in Central Thailand it is called Mahathat. Traditionally it is built at the center of the city.

6th photo Thai art: Wat Chet Yot is exceptional in Thai art as it was built to commemorate 2000 years of Buddhism. Constructed by King Tilokaraj, the stupa replicated the enlightenment site of the Buddha as well as that of the seven stations (weeks after his enlightenment).

7th photo. Thai art: This is the example of a stupa enclosed by another stupa. In ancient times, important stupa would be preserved by embedding in later-constructed stupas. The collapse of the outer stupa at Wat Athi Ton Kaeo revealed the original one inside.

8th photo. Laotian art The most important characteristic of Laotian stupa is the central element designed in the shape of a square lotus. Laotian stupas can be found along the Mekong basin including nowadays Laos and Northeast Thailand.

9th photo. Cambodian art. The group of stupas at Preah Reachtruap Hill is the most interesting monument in the former capital of Udong. The hill is beautified by the stupas in various styles. These stupas are meant for containing the relics of the king.

10th photo. Arakanese art. The shape of this stupa is bell shaped and topped with a circular, mushroom shaped hti (the finial ornament characteristic of almost all Myanmar’s pagodas).

Chedha Tingsanchali is Associate Professor on Indian and Southeast Asian art. He graduated from the National Museum Institute in New Delhi, India and now he teaches at the Faculty of Archaeology, Silpakorn University in Bangkok. 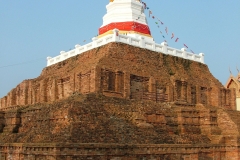 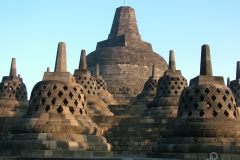 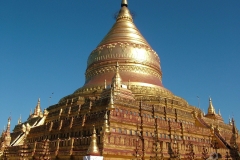 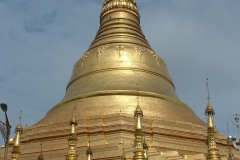 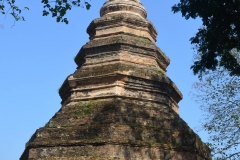 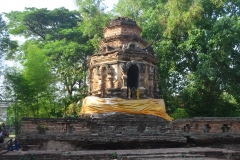 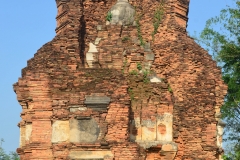 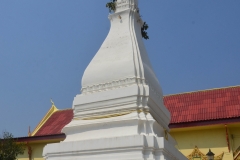 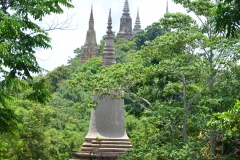 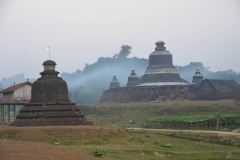