In a small two-story house located behind a big shopping mall in Bangkok business area, six people, four men and two women are busy working on sewing machine with a huge pile of cloth placed on the floor next to them.

“We all live here together. We work downstairs and live upstairs”, said Sinh (not his real name). He furthered that all of them are from Thanh Hoa province, North of Vietnam and have been working in Thailand for about three years

“We have tried many types of work already and ended up with sewing clothes”, he said.

Sinh is not only a sewing worker but he also acts as a subcontractor for his group. He gets the orders from Thai garment business owners and assign them to his group. They will get 10 Baht for each T-shirt and 18-19 Baht for each pant. It is hard work and to earn 10,000-12,000 Bath a month they have to work 16-17 hours a day.

These sewing workers are not as visible as other Vietnamese migrants. Thai people are used to see them in restaurants and food stalls, with concentrations in provinces along the border with Laos. The Vietnamese community is also outnumbered by migrants from other neighboring countries namely Cambodia, Laos and Myanmar who are estimated to reach 3 millions, while Vietnamese living in Thailand are in the hundred thousands.

Vietnamese migration to Thailand reflects the changes in mainland Southeast Asia’s political and economic situation. The first wave of migrants starting as far back as the Ayutthaya period was driven by warfare and religious and political persecutions, with large numbers fleeing the 1st Indochina War with the French and later the Vietnam War and its aftermaths. The second wave of Vietnamese migrants is instead driven by economic purposes and it signals a climate of peace and the growing normalization of Thai-Vietnamese relations, started with great discomfort in 1975 and progressively improved with the greater integration of the region following Vietnam’s accession to ASEAN in 1995. 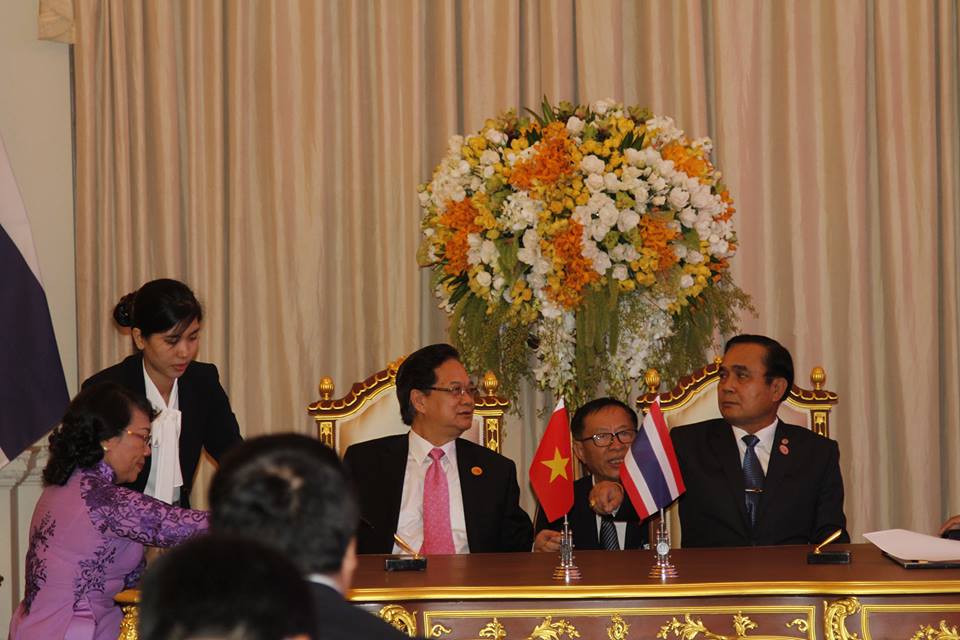 Most of these economic migrants have entered the county irregularly. Taking advantage of the easier access and convenient transportation, the social networks established by older migrants, and the mutual visa exemption for tourists from the two countries under the tourism cooperation agreement signed in 2002, they are able to arrive in Thailand and remain in the destination country longer than expected.

At the end of their one-month tourist visa, a broker brings them to the border to re-stamp the passport with re-entry permit. According to some Vietnamese workers, it costs them 1,000 Bath each month for the first 3 months and at the 4th month, they will be brought to another border and pay about 2,700-2,800 Baht and then they can re-enter and resume working in Thailand.

“I don’t know where the money goes to. I just pay to my broker. It is OK for me because I can go on working in Thailand”, said one restaurant workers. She reckons that it is worth as she can make about 4,200 Baht per week or 16,000-17,000 Bath per month, which is impossible for her to make in her hometown in Ha Ting Province –Central North of Vietnam.

There is no accurate number about how many recent Vietnamese migrant workers there are in Thailand currently. A 2014 TDRI report quoted the Thai Office of Foreign Workers Administration estimating the presence of 50,000 Vietnamese undocumented workers across the country. This is still a small percentage of the 617,804 Vietnamese tourists came to Thailand in 2014 (a rapid growth considering that in 2002 it was only 45,485). Nonetheless both governments are concerned about irregular migration and wish to regularize the flows of workers.

A first step was the Ministerial Resolution of February 2015 allowing migrant workers who have already been working in the country to register on December 2015 in order to work legally for one year in four sectors namely fishery, construction, domestic work and restaurant service. Thailand and Vietnam also signed a Memorandum of Understanding (MOU) on Labour Cooperation and the Agreement on Labour Employment in July 2015 to establish a contract work scheme between the two countries. The Prime Minister of both countries witnessed the signing during the official visit of Prime Minister Nguyen Tan Dung of Vietnam to Thailand, and the Ministers of Labours are entrusted with working out the details in a series of meeting to occur in 2016. Thailand is proceeding regionally and Vietnam has been invited in 2015 to be part of the annual CLMTV (Cambodia, Laos, Myanmar, Thailand and Vietnam) Ministerial Conference on Labour Cooperation.

However, there is disappointment on the Vietnamese side that the MOU is limited to only the construction and fishery sector while most of Vietnamese workers are in service and industry sectors. As a Vietnamese diplomat put it: “For the construction workers, yes, I agree that many Vietnamese workers have suitable skills and the wages in Thailand may inspire them to come to work here and apply under the MOU. However, for the fishery sector, Vietnam also has a huge fishery business and workers may prefer to work in Vietnamese fishing boats rather than Thai ones as the working conditions and income levels are not that different”. Negotiations continue as Vietnamese agents and other stakeholders argue for expanding the sectors for Vietnamese migrant workers.

Even though there may be challenges, it is important to both countries and their citizens to work out differences in regularizing Vietnamese migrant workers and protect them. After all, their labor-driven presence in Thailand can be seen as a sign of regional peace and improved bilateral relationship, which would have been unthinkable just 40 years ago when Thailand and Vietnam were at opposed ideological and political sides and Vietnamese would come to Thailand to seek refuge. As the proverb goes: every cloud has a silver lining.

(The writer is a former journalist who covered the Greater Mekong Region (GMS) and ASEAN. Now she is a free lance writer and consultant on HIV/AIDS, migration and other social issues).