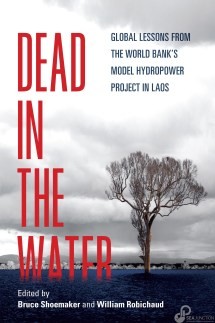 Dead In The Water by Bruce Shoemaker & William Robichaud (eds)

When I tell people I went to my first meeting on the Nam Theun 2 (NT2) hydropower project in Laos way back in 1991, I sometimes don’t know whether to be embarrassed or proud. At times it seems it has become an unhealthy obsession. But in reality this involvement has been sporadic and my renewed interest in the project over the last few years represents a return to NT2 after years during which I paid it little attention.

For a time, when I was living in Laos in the mid-1990s, the NT2 controversy was the biggest thing happening—dominating discussions and debate among NGOs, those in the diplomatic and bilateral aid community and discussions with Lao government officials and other local colleagues. As several international NGOs agreed to either endorse or accept paid contracts from the project developers, NT2 created large rifts and the controversy quickly spread beyond Laos and into the international media.

NT2 had a large impact on me personally. Witnessing the extent to which large corporate, government and international financial institutions would go to manipulate public debate and promote a misleading narrative in order to justify their favored project left me with a much more critical eye and what has become a life-long orientation towards questioning the agendas and initiatives of self-interested institutions claiming they are acting in the public good.

In 2001, as momentum built to proceed with NT2, I participated in a “river-based livelihoods” study of the Xe Bang Fai, the river slated to be dramatically affected. Our study, which documented the existing livelihood links local communities had to their river, never mentioned the dam. But it was very much in the background and its publication sent Bank planners scrambling to play catch-up in devoting more (albeit still inadequate) attention to potential downstream impacts.

NT2’s approval by the World Bank in 2005 was the source of not a small amount of disillusionment and cynicism–there seemed to be so many solid arguments against it, so many good reasons why it was the wrong project at the wrong time in the wrong country. But many governments and institutions had bought into the Bank’s rebranding of NT2 as a socially and environmentally responsible “model project.”

While I continued to visit the country for other work, for a long period I didn’t even have anything to do with NT2. While I stayed engaged in the region, I just tried to put it out of my mind and focus on other things.

This continued well past the time that the project was completed and became operational in 2010. My re-engagement dates from 2011 when the World Bank published its own book on NT2, Doing a Dam Better. I saw it as a self-congratulatory and premature puff-piece written before NT2’s many promises could even begin to be realized. In retrospect, its publication sparked my first interest in trying to eventually set the record straight.

By 2012 multiple reports were coming out suggesting that, in contrast to the public pronouncements of NT2’s supporters, not all was well. The reports of the project’s Panel of Experts, people I had previously unfairly dismissed as uncritical project cheerleaders, were becoming critical, even scathing at times, as implementation failures revealed the hollowness of the project’s social and environmental promises.

This first led to a renewed interest in examining what had happened on the Xe Bang Fai, through participation in a return study to the river in early 2014. A peer reviewer for our subsequent journal article, who apparently had a very positive view of NT2, ended up accepting our critical assessment of NT2 impacts on the river–but insisted that we should balance that by “focusing on all of the other positive aspects of NT2.”

This book, a collaboration with my longtime friend and colleague William Robichaud, as well as many other contributors with long histories with the project [namely James R. Chamberlain, Glenn Hunt, Marika Samuelsson, Satomi Higashi, N. J. Enfield, Ian G. Baird, Kanokwan Manorom, Sarinda Singh, HOah Quastel, Grainne Ryder, Witoon Permpongsacharoen, Carl Middleton, and Philip Hirsch], is I guess a response to that challenge and to Doing a Dam Better. And as we approached publication in early 2018 the World Bank declared success and announced the closure of its NT2 social and environmental project. Our book tells a different story and suggests that the World Bank’s decision is both premature and unwarranted.

Bruce Shoemaker is an independent consultant on development and natural resources who has conducted extensive research on the impacts of the Nam Theun 2 dam. His books include The People and Their River: River-based Livelihoods in the Xe Bang Fai Basin in Laos.