2nd #WhatshappeninginMyanmar Bi-Weekly Updates by Aung Zaw of The Irrawaddy

The Irrawaddy and SEA Junction have joined together to provide bi-weekly updates on the latest developments in Myanmar. Since 1 February 2021, Myanmar has been in turmoil as the Myanmar army, known as the Tatmadaw, detained State Counselor Aung San Suu Kyi and President Win Myint following a general election which Suu Kyi’s NLD party won by a landslide. The coup led by General Min Aung Hlaing brought an end to a decade of semi-democratic rule and returned full power to the military.

Courageously, the population has been resisting and demanding the release of the imprisoned leaders and the restoration of democratic rule.  A massive civil disobedience movement has emerged and hundreds of thousands are taking to the streets in spite of the military’s use of lethal force against protesters. At least 423 people, a majority of young age and even children in their own homes, have been killed and more than 3,000 people, including journalists, have been arrested. The global community has overall condemned the coup and the military abuses, but concerted diplomatic interventions is still too bland. While the future of Myanmar is in the hands of its people, international and regional bodies ought to isolate the military junta, ban arms, embargo business by the militaries and their cronies and address gross violations of international human rights and humanitarian law.

In these dramatic times, as The Irrawaddy writes on its website “information, analysis and truth are precious commodities” in the struggle for justice and freedom.

The series #WhatshappeninginMyanmar Bi-Weekly Updates aims to contribute to greater understanding of the current situation in Myanmar for informed action in support of the democratic movement in Myanmar and beyond.  Starting on 25 March 2021 every two weeks over the next three months at 3pm Bangkok time, The Irrawaddy’s Founder and Editor-in-Chief Aung Zaw will provide an analysis of the latest events for about 20 minutes before opening the floor for questions and answers. The second Update is planned for 8 April 2021

For zoom there is space for max 100 people and the Zoom Link for this first Updates is: http://bit.ly/Zoom-SEAJunction Zoom meeting will be open 10 minutes prior to scheduled time.

The series of updates is also meant to help The Irrawaddy in their fund-raising campaign to continue to provide quality and impactful journalism every day. For more information and to donate please see: https://bit.ly/3btQYpR 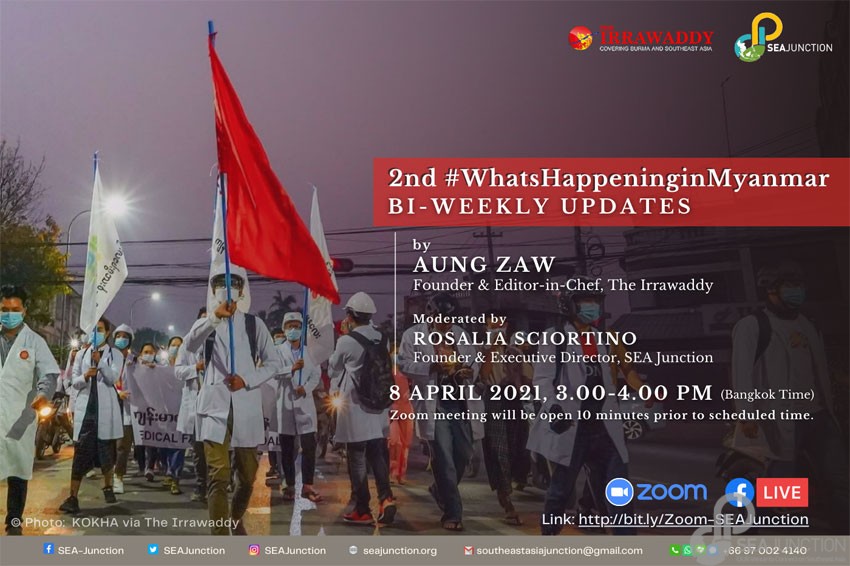 The Irrawaddy is a leading source of reliable news, information, and analysis on Burma/Myanmar and the Southeast Asian region. From its inception in 1993, The Irrawaddy has been an independent news media group, unaffiliated with any political party, organization or government. Founded in Thailand by a group of young Burmese activists who were forced to flee the persecution of the then military regime over the 1988 democracy uprisings, The Irrawaddy has a strong belief in democracy, and the crucial role of independent and accountable media for a democratic society. Since the opening up of the country in 2012, The Irrawaddy was able to move to Myanmar and operate from within the country, but it is now being threatened and its journalists are at grave risks as they continue reporting. For more information see: https://www.irrawaddy.com/about

SEA Junction and The Irrawaddy