Lost in Translation: Linguistics, Cross-disciplinary and Beyond? 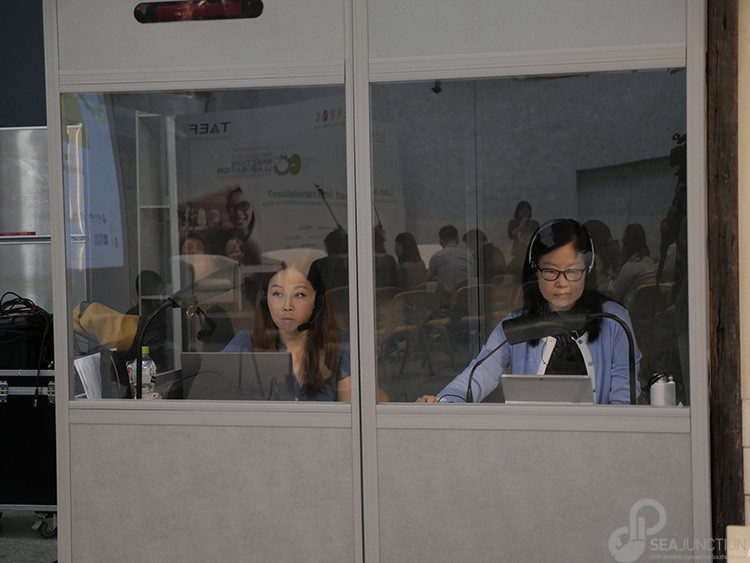 “Translating consists in reproducing in the receptor language the closest natural equivalent of the source-language message, first in terms of meaning and secondly in terms of style” (Nida and Taber 1969: 12)

Translation and interpretation are commonly perceived in the linguistic sense, changing one language into another language. They however can refer to much beyond as the processes of converting something into a different form. These include but are not limited to the collaboration between people in different fields to make, for instance, technology into art or art into social practice. Metaphorically, people with diverse backgrounds speak different languages. For both linguistics and beyond, there is a complexity in passage of translation and thus something might be lost during such a process. This was the focus of “Lost in Translation?” a session at the Mekong Cultural Hub’s Meeting Point 2022 I attended. It investigates what it could mean by translation, in what senses, and at the same time to what extent there is a loss in translation.

People often find it complicated to translate or interpret from one to another language, given the different contexts. Interpretation is even more difficult because of limited time to weave verbal words. In spite of differences, generalizing we can say that the challenges for both seem to be cultural rather than linguistic. The latter issue involves something that is untranslatable due to lack of terms in the semantic range and is solved in some way with the replacement of their closest equivalents. But culturally, when interpreting, the deeper meaning in each and every word’s essence is often lost. To ensure linguistic and cultural understanding, translators need to contextualize or in other words take the context, in which the audiences come from, into account.

Dorn Bouttasing, Founder and Director of Green Community Volunteers, gave us an example of Khmu interpretation complexity when working closely with the communities. Khmu is a Mon-Khmer language spoken predominantly among Khmu people of northern Laos. Instead of saying goodbye, people in some communities say “Silod’y humpo’h bueb O Nae” which literally means “when you sleep, dream of me”. The phrase is preferred to saying goodbye which to them implies saying forever farewell–that is we will not see each other again. Its translation is understandable but its essence is missing. We understand the meaning of sentences but may fail to grasp the culture and identity laid deeply and hidden within.

Translation, as the initial quotation reminds us, is not only about meaning but also about styles. Although it is the meaning that often comes first to serve the primary goal of communication, stylistics remain crucial as it can reflect the identities of speakers and signify emotions. The voice tones, word choices and formality of language are often misinterpreted or even not at all interpreted. The paralanguage in communication or non-linguistic form of communicative behavior is simply ignored: whether it be facial expression, eye contact or silence in between. We interpret words into words, but how can emotions be interpreted?.

Translation is required when we don’t speak the same language to facilitate our mutual understanding. Nevertheless there are times when we speak the same language but we still feel that we speak a totally different language that sounds so foreign to one another. We live in the same world but different realities. Perhaps we don’t share that one world, but live in many worlds, with different levels and ways of life. Among many others, we bring here briefly the cases when technology is translated into art and art to social practices or so-called socially engaged art. Curator and installation artist Wen-Hao Huang shared that people in the tech and art fields seem to live in different worlds and cannot communicate. There is a gap of how people in different fields perceive things differently and thus speak alien languages. Sometimes we cannot express complex and technical ideas in a language understood by all. The gap could not be entirely eliminated but narrowed down by a mediator who is able to comprehend both sides.  A mediator acts in a similar role as a translator who knows both languages.

Independent researcher Dian Ika Gesuri contemplated different lessons in translation of social engagement into art projects. She examined the capacity of artists in solving global problems and suggested to be realistic and practical. There is often a limit on what artists can do to generate change in a certain timeframe. Inspired by what she shared, it recalls that artists themselves are translators of stories on the ground. The injustice expressed through words and experiences of their own or others is translated to art as a powerful medium to raise public awareness and further call for collective actions. The gap during translation remains on one hand, for example stories are not fully transferred into art. The boundaries of art and social, as well as art and technology, are blurred. One field migrates to another more or less, fully or partially. On the other hand, what’s gained in translation is relatively huge. The interdisciplinary collaboration offers the knowledge and experience rarely gained from previous artistic creation. Art and social practice emphasizes what and whom art is for. Technology has redefined how artists could create .

All this shows the complexity of translating and interpreting. In a linguistic sense, it is not a mere passage of words in one language to another but involves their contextualization. Without context, deeper understanding is missing. Although actions speak louder than words, it is the actions as well as the emotions that are at risk of being left untranslated. Translation also transgresses the language. In the figurative sense, people speak the same linguistic language but interpret the meaning according to their background and this creates comprehension gaps. Nonetheless, irrespective of these challenges and all that may be lost in translation, translation remains essential since it enables the reproduction of knowledge, artistic creation, social impact and, most importantly, understanding of our diverse humanity.

The article was produced as part of a partnership between SEA Junction and Mekong Cultural Hub (MCH). Meeting Point is a platform hosted by MCH, which brings together people interested in arts and society in Asia and offers a space to connect and to showcase related work happening in the region. The program is built up over 6-12 months, with practitioners producing sharing sessions, creating participatory art work and hosting local gatherings in their communities. The next Meeting Point is planned for March 2024.

Lattapol Jirapathomsakul (Bom) is Program Manager at SEA Junction. He also serves as Regional Representative for Mekong Cultural Hub during 2021-2022.