On 24 November 2021 at 7 pm (Bangkok Time), SEA Junction in collaboration with Asia Justice and Rights (AJAR) will hold the 15th #WhatsHappeninginMyanmar Bi-Weekly Updates. The update series was started soon after the coup coup d’état in Myanmar with the aim to contribute to a greater understanding of the evolving situation there for informed action in support of the democratic movement in the country and beyond.

Since 1 February 2021, Myanmar has been in turmoil as the Myanmar army, known as the Tatmadaw, detained State Counsellor Aung San Suu Kyi and President Win Myint following a general election which Suu Kyi’s NLD party won by a landslide. The coup by General Min Aung Hlaing brought an end to a decade of semi-democratic rule and returned full power to the military. Courageously, the population has been resisting and demanding the release of the imprisoned leaders and the restoration of democratic rule and the National Unity Government (NUG) has been formed by the Committee Representing Pyidaungsu Hluttaw (CRPH), a group of elected lawmakers and members of parliament ousted in the coup.  A massive civil disobedience movement has emerged and hundreds of thousands are taking to the streets in spite of the military’s use of lethal force against protesters, with many killed, wounded, arrested and tortured. The coup has also entangled Myanmar’s COVID-19 vaccination as well as containment efforts and the pandemic is now out of control. Economic collapse amid escalating conflict is making of Myanmar a failed state. The global community has overall condemned the coup and the military abuses, but concerted diplomatic interventions are still too bland. Recently ASEAN has finally excluded Tatmadaw representatives from the next summit, but still fails to recognize NUG as the legitimate representative of Myanmar. While the future of the country is in the hands of its people, international and regional bodies ought to isolate the military junta, ban arms, embargo business by the militaries and their cronies, address gross violations of international human rights and humanitarian law and provide humanitarian relief to the population.

The Updates are meant to be short informal dialogues with a speaker who provides an analysis of the latest events in the preceding two weeks for about 20 minutes before the moderator, SEA Junction’s Founder and Director Rosalia Sciortino, opens the floor for questions and answers. Lasting from March to June 2021, the initial series of six updates was held in collaboration with the Irrawaddy and featured its Founder and Director Aung Zaw as resource person. This first series was followed by a second series of six episodes with well-known Peace and Security Advocate Khin Ohmar in collaboration with AJAR. In view of the positive response, and taking into account that there is a need to keep Myanmar on the public agenda in the midst of many other global worries, we are continuing the series for another round of six events, with Debbie Stothard, an active promoter of human rights in Burma and the ASEAN region, continuing our collaboration with AJAR.

Debbie Stothard is the coordinator of Alternative Asean Network on Burma (Altsean-Burma), an NGO campaigning for human rights and democracy in the ASEAN region, with a particular focus on Burma, which she founded in 1996. During her 32-year career, she has worked as a journalist, community education consultant, governmental advisor and trainer in Malaysia, Australia and Thailand. She has participated in democracy building in Burma, organising advocacy meetings and campaigns on human rights, in Burma and other ASEAN countries since 1987. These activities led her to work in collaboration with UN and ASEAN institutions as well as several governments in Asia, North America and Europe. She is also invited by universities, conferences and media outlets to speak on the Burmese situation. ALTSEAN produces a monthly brief on the coup that can be read at https://www.altsean.org/coupwatch-briefer.html 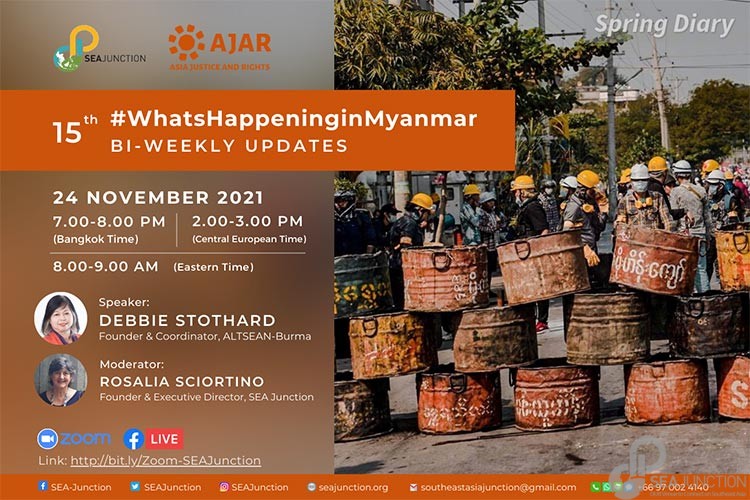