The Mekong is Blue and Dried: Visual Storytelling of the Mekong River’s Environmental Degradation Open Call for Photo & Art Essays 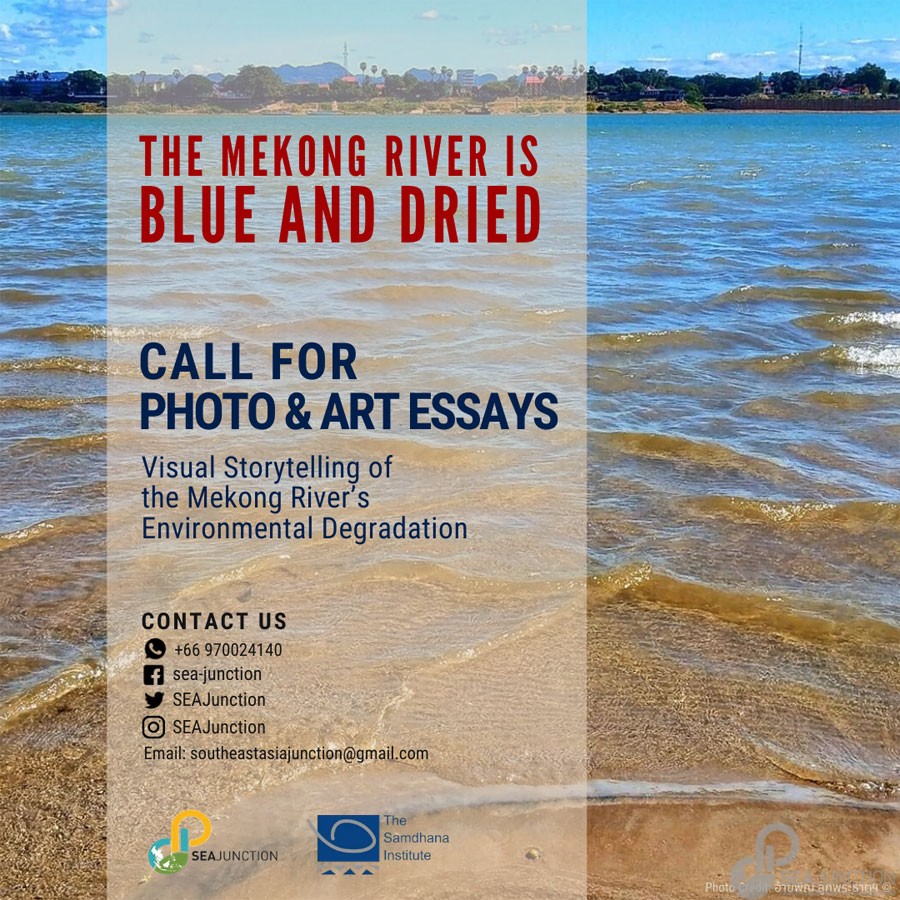 The Mekong River is the most diverse in fresh water fishery in the world with the greatest biodiversity after the Amazon. It originates in the Tibetan plateau and flows through mainland Southeast Asia before emptying in Vietnam’s Mekong Delta into the South China sea. The Mekong feeds more than 60 million people who live along its entire route. Among them there are indigenous communities that depend on the Mekong for their natural resource-based livelihoods and as a source of income. Their way of life is today threatened by the ongoing dam-building race since the first dam was built on the Mekong mainstream 20 years ago.

Today, eleven dams are planned for the lower mainstream Mekong, and 300 more are in the waiting on feeder waterways. Cumulative impacts have been felt by the riparian communities living downstream. The first lower Mekong dam Xayaburi in Laos operated for a test run in July 2019 exacerbated the drought in the region. The Mekong water level is at its lowest in 50 years. The second dam on the lower Mekong in Laos (Don Sa Hong) was built against concerns regarding its blocking major channels of migratory fishes to spawn upstream and in the Mekong’s tributary rivers. In particular, it affects the migration of endangered Irrawaddy dolphins living close to the Laotian-Cambodian border where the dam is also located.

Adding to the multiple impacts of dams, the collapse of Xe Pian-Xe Namnoy saddle dams on Xe Kong River which is a tributary of the Mekong River in Southern Laos, killed at least 40 people and displaced more than 4,500 people. This was a dark reminder of the threats dams pose on people’s lives and the lack of accountability of multinational corporations.

The combination of upstream and downstream dams’ operations has blocked the natural rich nutrients and sediments and the water flow. In late 2019, the Mekong turned into rare blue color instead of its usual brown. The blue color of the Mekong reflects “dead” for aquatic animals, other animals that dwell in the Mekong riverbank and millions of people who depend for their livelihood on the biodiversity of the River.

Networks of environmental experts, civil society, media and academia tireless continue to advocate for environmentally and socially friendly measures for the Mekong River.  They raise questions about the need of such dams in view of other forms of green energy such as solar power, the extenuating risks associated with hydropower construction, and the devastating social and economic effects on local populations.

This initiative launched by SEA Junction with the support of the Samdhana Institute on 15 June 2020 for a period of three months, aims to contribute to these ongoing efforts through the creative use of visual documentation and art. We are pleased that the Mekong Environment Forum has offered to partner with us on this and help with promoting the initiative and sharing relevant material. We hope other organizations will also join our effort.

“The Mekong River is Blue and Dried” initiative calls all those interested and particularly photographers, artists and organizations working with communities in the Greater Mekong Region (GMS) to share their visual stories. The photos and art works accompanied by a short essay should reflect on four main themes:

Looking forward to collaborating with all of you for a healthier Mekong!

SEA Junction
SEA Junction, established under the Thai non-profit organization Foundation for Southeast Asia Studies (ForSEA), aims to foster understanding and appreciation of Southeast Asia in all its socio-cultural dimensions, from arts and lifestyles to economy and development. Conveniently located at Room 408 of the Bangkok Arts and Culture Center or BACC (across MBK, BTS National Stadium), SEA Junction facilitates public access to knowledge resources and exchanges among students, practitioners and Southeast Asia lovers. For more information see www.seajunction.org, join the Facebook group:  http://www.facebook.com/groups/1693058870976440/ and follow us on twitter and Instagram @seajunction

The Samdhana Institute
Samdhana, in Sanskrit, means healing, uniting, peacemaking. It was formed in 2003 by a group of individuals, conservationists, development practitioners, constituting the first Samdhana Fellows; moved by the same commitment of ‘giving back’ what they know to the next generation; and bringing together skills, knowledge, experiences, networks, colleagues and friends; delivering maturity, strength and sustainability. For more info see www.samdhana.org