Photo Exhibition “Women Out on the Streets for a New Burma”

Since 1 February 2021, Myanmar has been in turmoil as the Myanmar army, known as the Tatmadaw, detained State Counselor Aung San Suu Kyi and President Win Myint following a general election which Suu Kyi’s NLD party won by a landslide. The coup d’état led by General Min Aung Hlaing brought an end to a decade of semi-democratic rule and returned full power to the military. Courageously, the population has been resisting and demanding the release of the imprisoned leaders and the restoration of democratic rule. A massive civil disobedience movement has emerged and hundreds of thousands continue to take to the streets in spite of the military’s use of lethal force against protesters.

Women have been an integral part of the protest, often being on the frontline of the movement in spite of the danger of being killed, wounded, arrested, tortured and the increased risk of sexual harassment and violence. As the New York Times wrote in March “By the hundreds of thousands, the women have gathered for daily marches, representing striking unions of teachers, garment workers and medical workers — all sectors dominated by women”. Women challenge the dictatorship as well as the patriarchal norms, misogyny and sexism rooted at its core. The idea of impurity of women and their relegation to the domestic domain has been confronted by exposing “feminine” attributes in public. For instance, as the exhibition photos show, during protest women proudly carried bras and sanitary pads. Other photos also document the display of women’s drying htamain or longyi (sarong), which traditionally is believed to harm men’s hpon (mystical power), thus lowering the “masculine status of the security force”.

The photo exhibition, organized by SEA Junction in collaboration with the Women’s League of Burma, the Myanmar Project and Asia Justice and Rights, documents women’s actions out on the streets of Burma since the coup d’état. Lasting from 23 November to 5 December, the exhibition showcases photos taken by a collective of recent graduates in journalism in Burma who have been covering the protests from all around the country under the umbrella of Myanmar Project as well as photos collected by the member institutions of the Women’s League of Burma. Together, the collection shows how wide-spread, diverse and empowering women leadership and participation has been and continue to be in opposition to the Tatmadaw.

The exhibition will be launched with an online event to commemorate the International Day for the Elimination of Violence against Women and kick off 16 Days of Activism against Gender-Based Violence. The event will be held on 25 November at 4.00-5.30 pm (Bangkok Time) via Zoom (Link: https://bit.ly/ExhibitionLaunch-25NOV) and Facebook Live on SEA-Junction page. 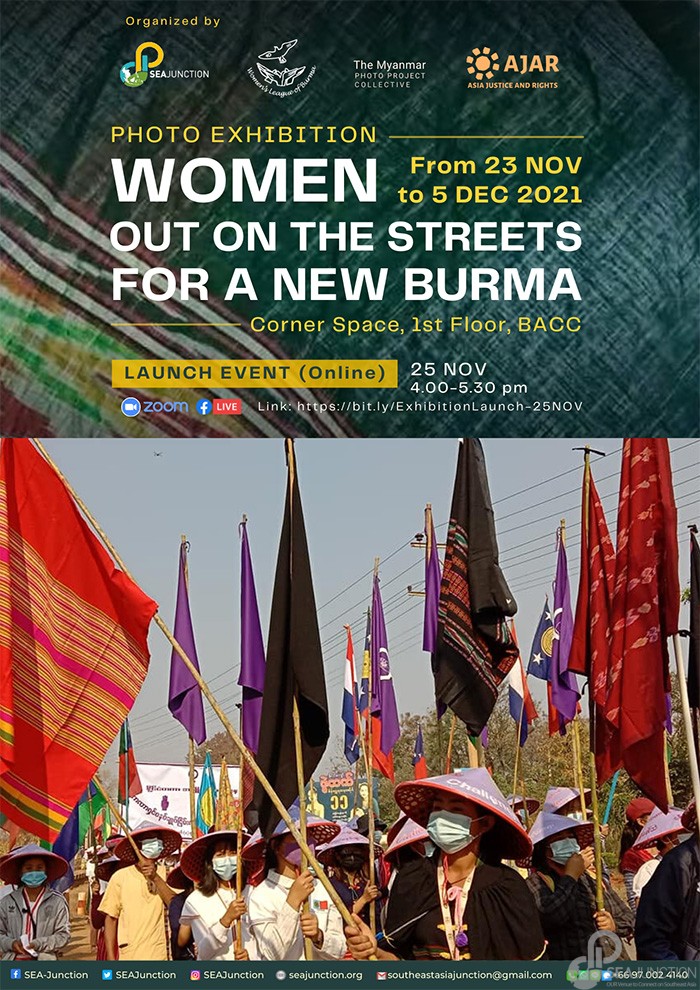 WLB was established in 1999 with the aim of increasing the participation of women in the struggle for democracy and human rights, promoting women’s participation in the national peace and reconciliation process, and enhancing the role of the women of Burma at the national and international level. For more information, see www.womenofburma.org

A group of young journalists in Myanmar, a collective called The Myanmar Photo Project, spent 6 months documenting the unfolding events across the country. Under cover of anonymity, they tell Laure Siegel what has been happening through a series of photos. For more information, see https://blogs.mediapart.fr/laure-siegel/portfolios.