Art and Activism in the Age of Covid-19 in Iloilo City: A Tribute to Our Frontliners by Vic Salas

A couple of weeks ago, a new set of murals appeared in Tanza, city proper, just a block away from the main wet market.  The drab walls, some stinking with urine, had been cleaned and painted white, while a discernible set of faces emerged. These later turned out be close-up renditions of masked faces – those of city front liners caught up in the epidemic.

As of September 28, Iloilo city has recorded over 2200 cases of covid-19, with about a tenth of these from returning overseas workers and locally stranded individuals.  In the past month, there have been many more cases of local transmission – people with no recent history of travel outside the city.  Several hospitals temporarily closed some of their wards and departments for a few days, due to having reached maximum capacity, or for disinfection after personnel tested positive.

Since around 2005, there have been remarkable developments in the city for the most part attributed to enlightened leadership and responsive local governance. Iloilo was twice awarded the coveted “Galing Pook” award (in 2012 for the top festival in the country, the “Dinagyang” or “Revelry” Festival, and in 2018 for the Iloilo and Batiano River Development project). The award recognizes local government units for their model and replicable projects.  And more recently, in January 2020, the city was given a Clean Tourist City Award by the Association of Southeast Asian Nations (ASEAN).

One of the most prominent expression of these developments is the series of esplanades –  a public infrastructure-cum-flood control project that has reaped awards nationally and internationally.  It is now a 10 km-walkway and bike path along the Iloilo river, connecting several districts of the city.  These were designed by prominent Philippine urban planners and landscape architects, and vigorously supported by the local government and legislators from Iloilo in the senate and congress.

More recently there has been a renaissance of art spaces, and the city now boasts of 15 museums and a well-restored heritage district that showcases Iloilo’s array of colonial-era buildings, many with distinct art deco features.  And many sites in the city that used to be nothing but blank walls have been energized, refreshed and invigorated with attractive, colorful and eye catching murals that celebrate Iloilo’s history, tourist attractions, environmental activism, and local heroes and heroines – all done by local artists with the support of the local government and the private sector.

The Murals Dedicated to Frontliners

Many murals around the city celebrate Iloilo’s history, tourist attractions, environmental activism, and local heroes and heroines.   With COVID-19 a new kind of hero has emerged as represented by the murals dedicated to those who directly address the epidemic for the benefit. The murals entitled “Our Frontliners” are located at the corner of Jalandoni and Ledesma streets.  Each mural is about eight to nine feet in height, with a face in extreme close-up, from the crown to the neck, depicting 14 frontliners in their headgear, face masks, face shields, and protective equipment.  Those painted include medical and nursing staff, government officials, police, fire men, security guards, the military, barangay tanods (the village leaders), drivers of public vehicles, farmers, cooks, garbage collectors and delivery staff. Some even have their names, insignias and titles.   One has a resemblance to the city mayor.

The city government commissioned the artists – led by Ronnyl Bulahan, Richie Apruebo, Carren Evangelista, Kinno Florentino, Andreil Gequillo, Meting Namo and assisted by Noma Lisa. They all belong to the “ABAY” (Artista ng Bayan) collective art group, and the “cycling heARTS” bike and artist group. A second mural – a bas relief sculpture—is underway, on the riverside, at Esplanade 4.  This is funded by the city mayor Jerry Trenas and Senator Frank Drilon, a son of the city.

The artists of Iloilo have done their part to respond to the needs of the less fortunate affected by covid-19.  An online show and auction, “Ilonggo Artists Against Covid-19” was an initiative of the city government, and coordinated by Raisa Trenas and artist-biker Rock Drilon.  300 artworks by 86 artists were donated, raising three million pesos (roughly $60,000) through an online gallery in May.  Several internationally acclaimed Ilongo artists based in Manila and abroad – Manuel Ocampo, Emmnuel Garibay, Ofelia Gelvezon-Tequi,  Gerardo Tan and Antipas Delotavo – provided pieces of their work.

The money raised was used to provide 230,000 washable cloth face masks for free distribution, prioritizing indigent city folks and those who lost work during the pandemic – trisikad and pedicab drivers, market and pier porters, informal sellers and their families. It also generated some income for the artists (A percentage of the sales went to them, and a total of P65,000 or P2,500 per artist was given back to those who weren’t able to sell their works).  The project also employed 96 sewers, mostly women, who sewed the face masks. Cheesecloth and the material for the masks was donated by flour millers and the private sector.

The artist engagement with murals, auctions and other initiatives, is a prime example of the efforts of the city, private sector and community partners in combatting covid-19 and mitigating its impact in the city, through the popular slogan, “Ba-to Iloilo” (“Fight,  Iloilo !”), which has been adopted as a rallying cry by the city.

Vicente Salas is a physician and public health specialist who has worked for over 30 years with the UN, international development organizations and local NGOs on migration health, HIV, sexual health, TB, leprosy, and LGBTQ rights and advocacy. He is a native of Iloilo city and has decided to retire there. He enjoys cycling around and documenting urban art, funny signage, the colors and sights of wet markets, and various types of local transportation and the loads they carry. 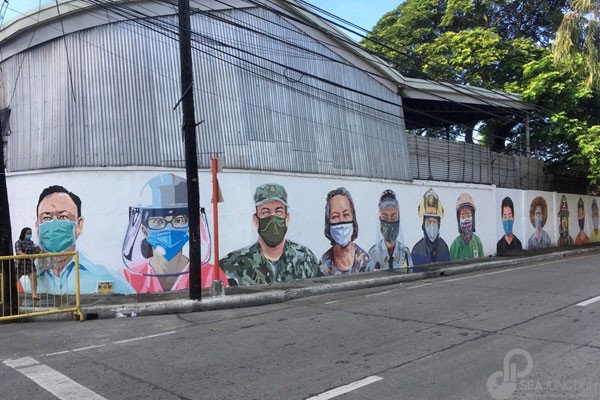 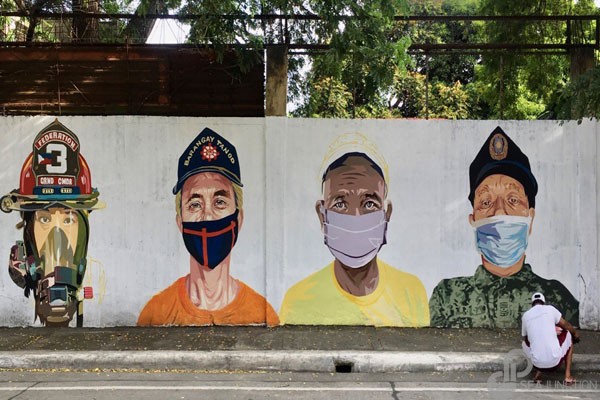 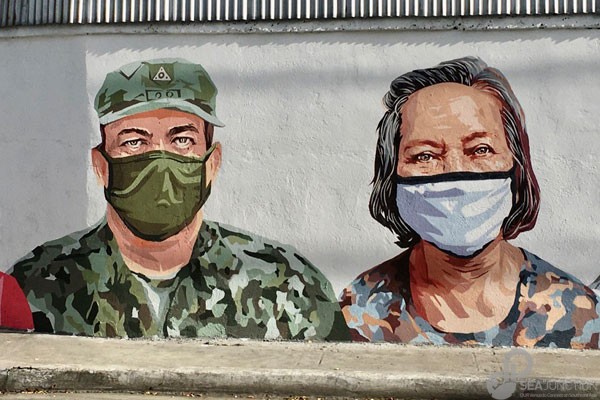 Military sergeant and a vendor (Photo by Vic Salas) 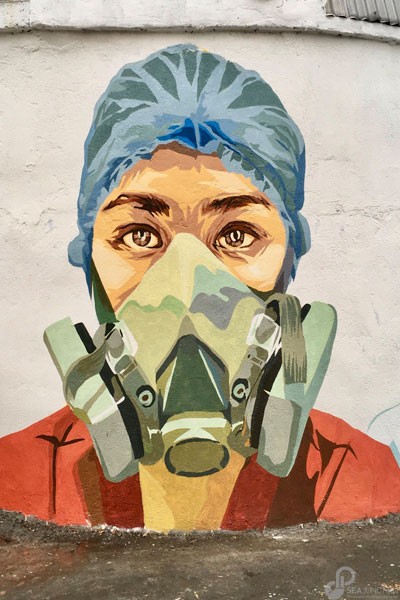 Medic in her scrubs and mask (Photo by Vic Salas) 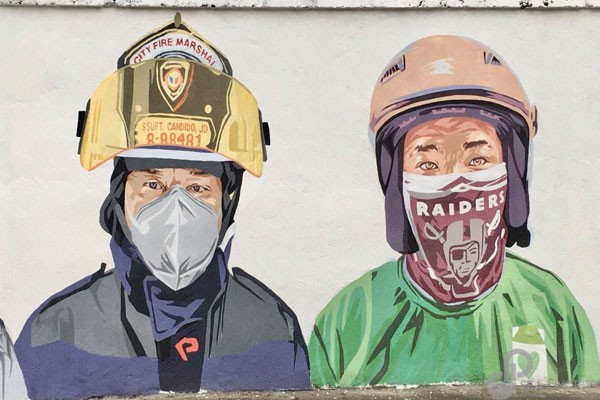 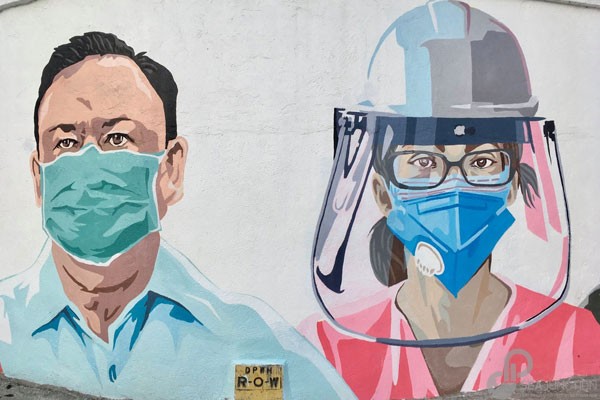 A city official and a health worker, probably a nurse (Photo by Vic Salas) 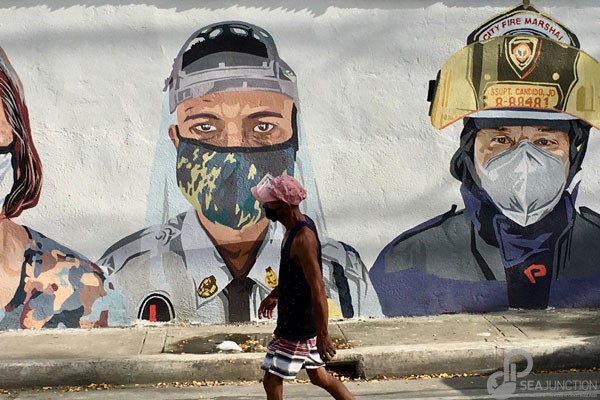 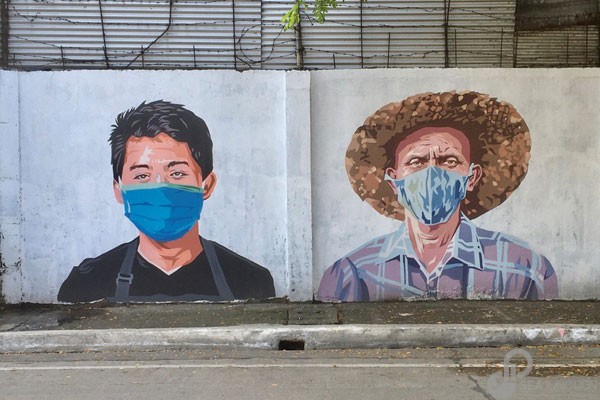 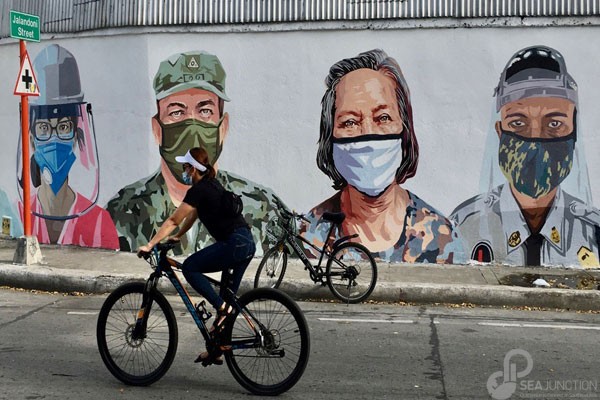 Pedestrians and cyclists pass along the mural (Photo by Vic Salas)