Gravediggers in Jakarta Race Against Time by Edy Susanto

Towards the end of April, under the blazing sun of Indonesia’s capital Jakarta, gravediggers in Pondok Rangon Public Cemetery wielded their shovel and dug into the ground. Since Jakarta reported its first official COVID-19-related death in mid-March, the number of deaths rapidly increased to the point that gravediggers could not event take a break. The provincial government ordered that those who died from COVID-19, as well as those suspected of being infected, had to be buried only in two public cemeteries – Pondok Rangon in East Jakarta and  Tegal Alur Public Cemetery in West Jakarta. In the populous city of Jakarta, burial space is an issue also in normal time and, according to the Governor, these were the only cemeteries with sufficient land.

There are about 80 gravediggers in the Pondok Rangon cemetery, who are paid by the Jakarta government and some informal workers paid directly by the deceased’s families. The gravediggers are usually divided into four teams. Each team is responsible for one specific task for a week, such as digging graves, cleaning up graves, mowing the lawn and cleaning sewer lines in the cemetery. The teams take turns every week to complete the four main jobs. But since COVID-19 broke out, the most senior gravedigger in the cemetery, Minar, says that he has been digging graves every day, even if his team was supposed to be assigned to other tasks. A team of four usually work on one grave and it usually takes 2 hours, but now grave diggers have to work faster as there are more graves to dig on average. Also, the protocol for infected bodies is to have the burial done as soon as possible to minimize the risk of the virus spreading.

Gravediggers starts the day at 7am and finish work at 6pm when the sun finally disappears below the horizon. They feel tired as they have to dig more graves than usual and faster, but cannot stop until the cemetery closes. Donned with personal protective equipment (PPE), they take care of carrying the body out of the ambulance and bury them in the specially reserved area of the cemetery. The bodies are in a coffin and wrapped in multiple layers of plastic so it is relatively safe. It is those who may not have been identified as COVID patients that are more of a risk.

The gravediggers have to overcome their lingering fears and that of their relatives about becoming infected and bringing the virus back home. Initially they did not have gloves and proper equipment and they just bought what they could to protect themselves.  Eventually they received complete outfits thank to private donations. They follow all the procedures and accept the discomfort of wearing the PPEs for hours in the heat of Jakarta in order not to get infected. They also eat their meals of rice and condiments in the cemetery. Normally they would go back to their homes near-by neighboring the cemetery, but these days they remain stand by in case they are needed. They feel empathy for the families who have lost their loved ones and cannot really have a proper burial and hope their work alleviates their pain.

When they finally go back to their family, they immediately wash with soap and put all their dresses to dry outside for some time before washing them. They also recommend their wife and children to wash their hands and use the masker when outside the house. Economic necessity, a sense of duty, courage and humanity, trust that compliance with prevention measures will protect them and that this is a temporary situation, keep them going and make them resilient in facing COVID-19.

Storyteller/Photographer
A documentary photographer born in Jakarta, Edy, has a great interest in documenting social issues. He completed a special training on photo journalism at Antara Journalistic Photo Gallery in 2000 and has attended a number of training and workshops in photography, including by well-known German photographer Peter Bialobrezky. He worked as a contributor to national media and international photo agencies, including Worldpicturenews, a New York based photo agencies and Drik-Majority World photo agencies. His photos have been published in Majalah Djakarta, Majalah Tempo, Playboy Indonesia, Marie Claire Indonesia, The Jakarta Post, National Geographic Indonesia, Smithsonian, Newsweek, Japan, Grand Reportage, Science and view,France. In 2009, his photo essay on HIV/AIDS was selected as one of the best photo essays in Tempo Magazine. He has joined various exhibitions, including Jakarta Art Foto Summit at the National Gallery (2007), Jakarta International Photo Journalism Festival, and SEA Junction-initiated Scapegoating the ” Other’ in Southeast Asia in Salihara Gallery (2018). He also took part in a variety of photo book projects such as Fifty-Seven Seconds and Politics of Citizenship in Indonesia. Edy works now freelancer and can be contacted at his website www.edy-susanto.com and on Instagram @edotsusanto 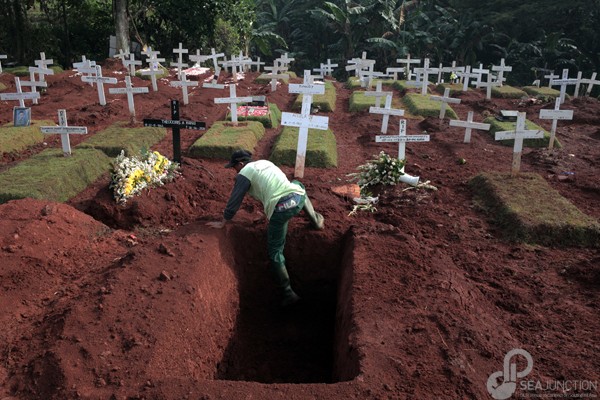 Coming out of the grave after it has been dug in the Christian section of Pondok Rangon cemetery. (Photo by Edy Susanto) 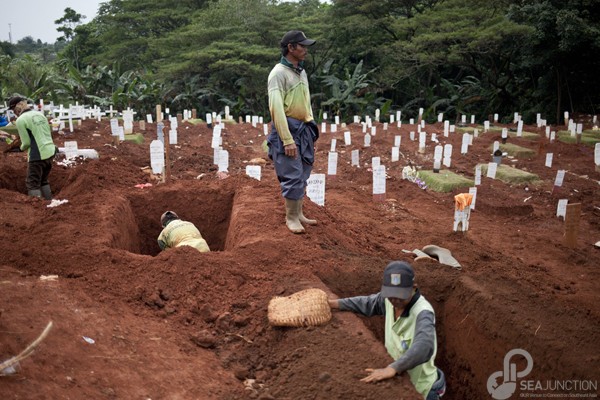 Recent graves with temporary name boards and new graves in the Muslim section of the cemetery. (Photo by Edy Susanto) 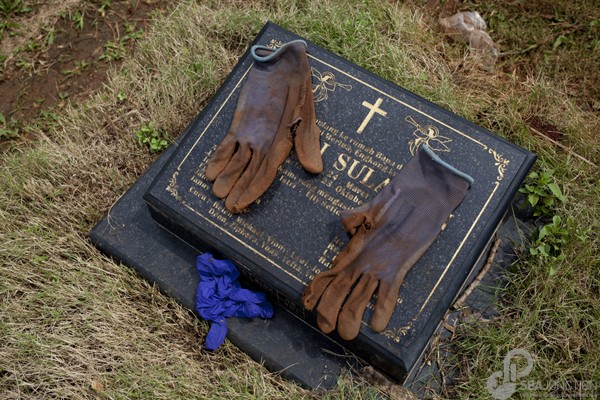 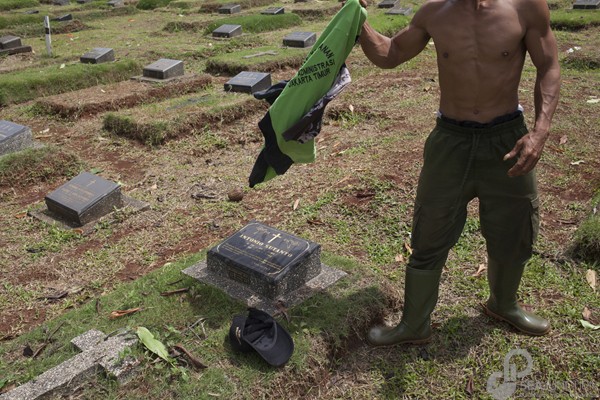 One of the gravedigger prepares to leave to eat and rest a moment. (Photo by Edy Susanto) 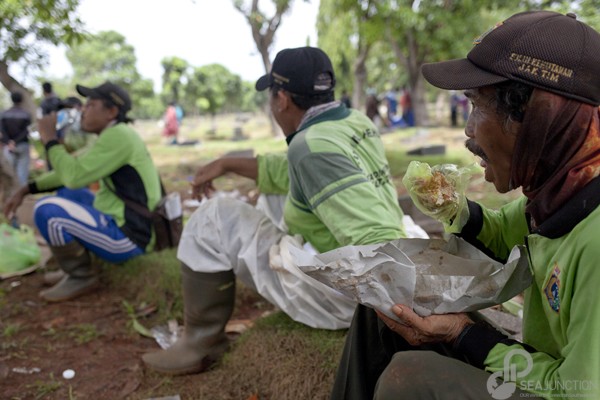 Some of the gravediggers take a rest and eat their meal. (Photo by Edy Susanto) 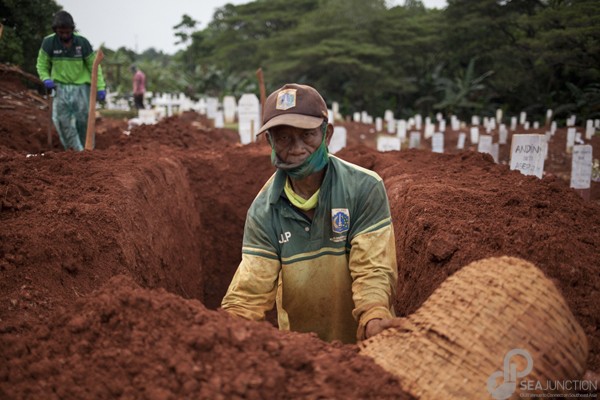 Graves are being prepared for burials adhering to COVID-19 protocols. (Photo by Edy Susanto) 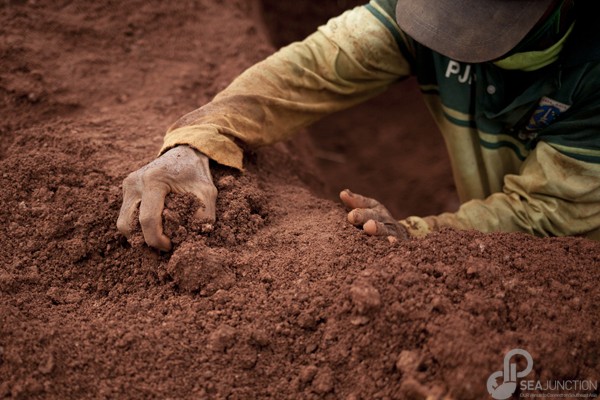 By hand the grave’s soil is adjusted in preparation for burials adhering to COVID-19 protocols. (Photo by Edy Susanto) 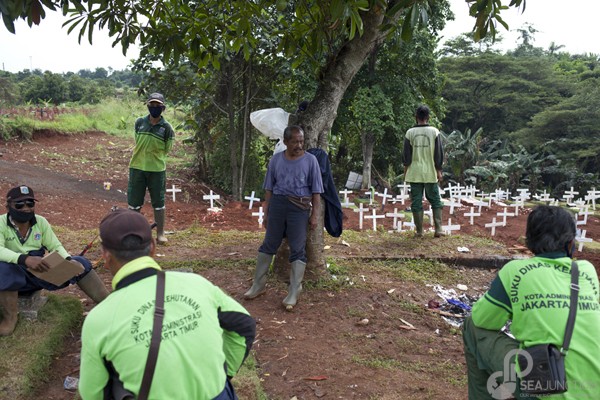 Minar, standing by the tree, is the most senior gravedigger in the Pondok Rangon Cemetery. (Photo by Edy Susanto) 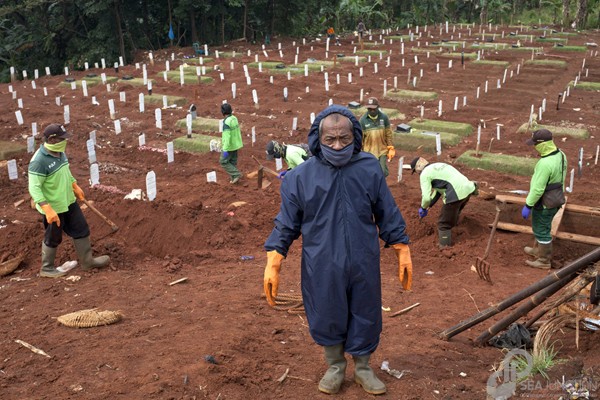 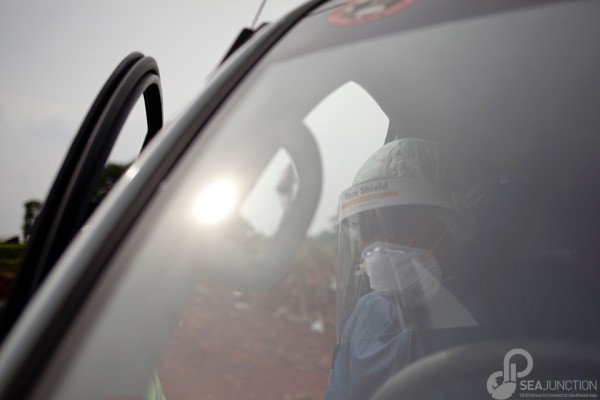 The ambulance, used in Indonesia to carry the deceased, arrives at the cemetery. (Photo by Edy Susanto)

The burial is executed in adherence to the COVID-19 protocols. (Photo by Edy Susanto) 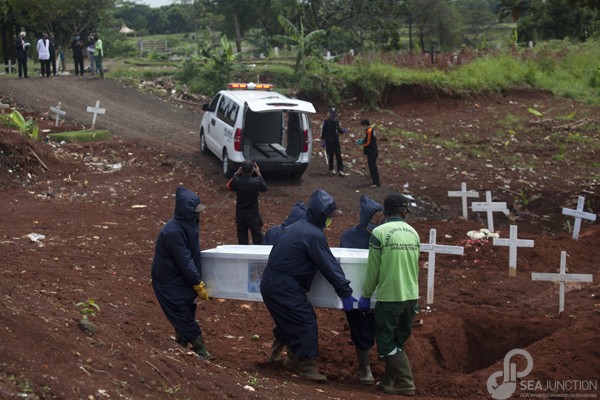 The burial is executed in adherence to the COVID-19 protocols. (Photo by Edy Susanto) 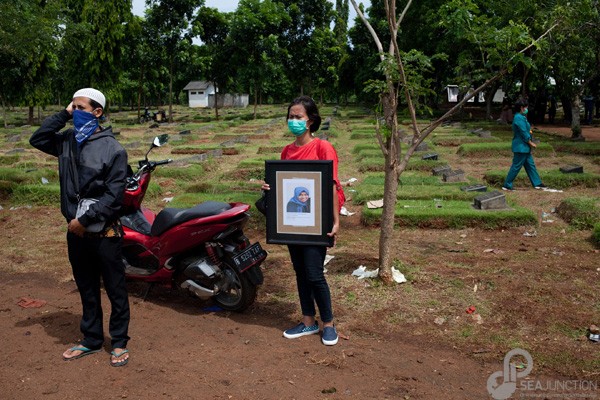 The husband of a nurse buried in adherence to the COVID-19 protocols, prays at a distance while a relative holds his wife’s picture. (Photo by Edy Susanto) 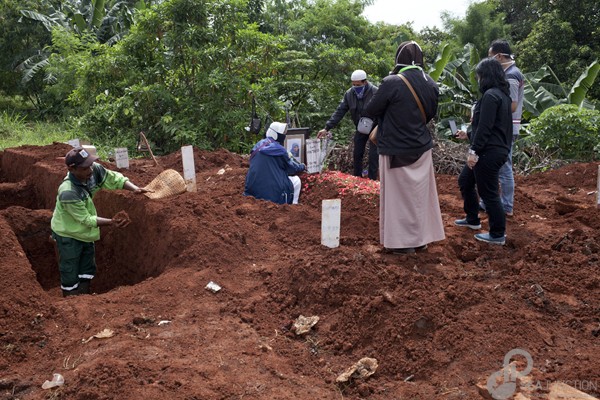 Only few family members can attend the burial in adherence to the COVID protocols. (Photo by Edy Susanto) 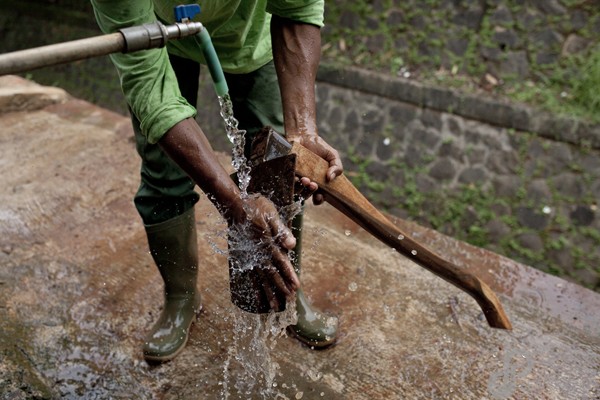 After each burial, the gravediggers wash themselves and their tools carefully. (Photo by Edy Susanto) 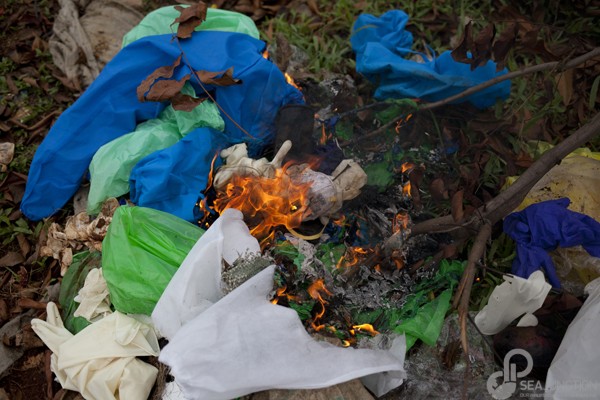 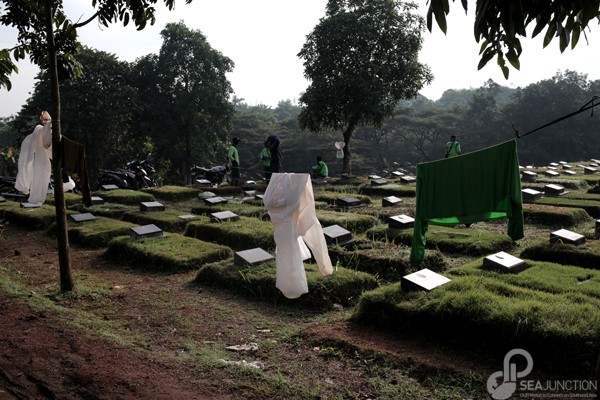 PPEs are hanged to dry after being washed for reuse due to limited supply. (Photo by Edy Susanto) 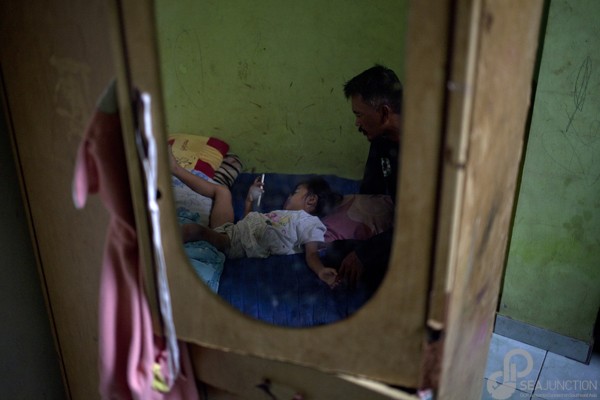 One of the gravedigger, Junaedi, enjoys playing at home with his child (Photo by Edy Susanto) 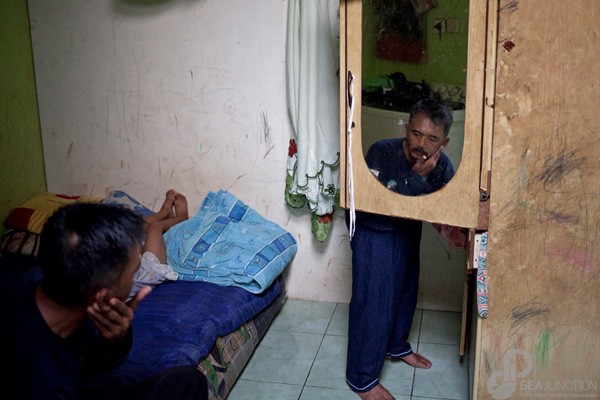 One of the gravedigger, Junaedi, takes a rest at home while his wife prepares a clean uniform to wear (Photo by Edy Susanto) 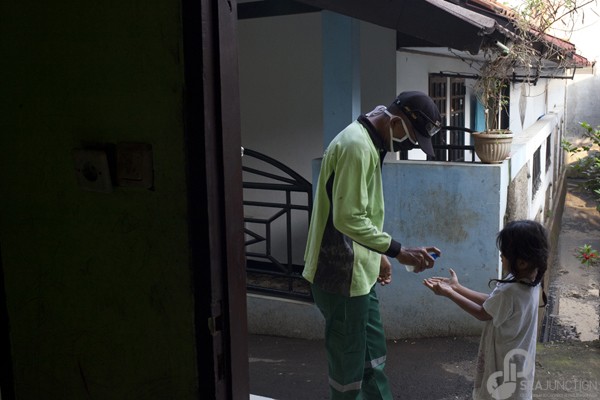 One of the gravedigger, Junaedi, makes sure his daughter sanitizes her hands before he goes back to the cemetery. (Photo by Edy Susanto)