Photo essay for the Special Initiative From Fear to Resilience: Visual Storytelling of COVID-19 in Southeast Asia by SEA Junction and Partners

The Balinese live with daily rituals based in animism, ancestral worship, and Hindu-Buddhist religion. Every ceremony requires offerings presented with incense and holy water. On full and new moon nights, more offerings are presented. The 210-day ritual cycle also has auspicious days with additional offerings. These regular holy days set a kind of rhythm to life in Bali.

So what happens when unexpected events such as natural disasters disrupt normal life? The current corona virus pandemic has presented problems never encountered before in Bali. While illnesses such as dengue and malaria show up dramatically in infected persons, Covid-19 creeps up almost invisibly.

The Balinese believe that invisible demons cause illnesses, so they and their leader Durga, Hindu goddess of disease and death, must be appeased with offerings and prayers. On 26 March, the second day of the Saka lunar-solar year 1942, the Balinese were advised to stay at home but could make noise, cook, use electricity and the internet, work, and play as normal. These activities were not allowed on Nyepi, the Day of Silence on New Year’s day. Talismans of a shallot, garlic clove, and red chili pepper on a skewer called penolak mala (repellant of danger) were placed on thorny pandanus leaves marked with a chalk cross and affixed outside house gates. Demons dislike strong smells and sharp objects, and the cross or tapak dara is a sign of protection.

A week later on 2 April an unusual offering to Yama, Hindu god of the underworld, was placed on the ground outside the house gate at sunset. This nasi wong-wongan mancawarna (human shaped multicolored rice) differed from a regular one of white rice, a color which was only used for the head to symbolize pure and clean thoughts. The right arm of red rice symbolized physical strength, which was balanced by a left arm of turmeric colored yellow rice representing spiritual power. The legs were made of purple rice to symbolize overcoming danger. The torso was a mixture of these four colors to represent a coming together of all the forces for protection.

The third household ritual in Bali was the most complex and took place at dusk on 4 April, a holy day for honoring song birds and gamelan musical instruments which both make beautiful sounds. A white nasi wong-wongan was offered on the ground in the household temple to Shiva, Hindu god of death and reincarnation. A multicolored one was placed on the ground in the central yard to Ibu Pertiwi or Mother Earth. Outside the house gate a purple rice figure placed on the ground along with a pejati offering on a nearby bamboo shrine were offered to Durga to inform her of the request to not enter the household and cause illness to the occupants. On the house gate was nailed a tapak dara gesing or bamboo cross tied together with red, black and white threads and marked with chalk paste. At the pointed ends of the cross were tied thorny pandanus leaves, holy grass, and herbal leaves. This served as a powerful protective charm. After these were all in place and presented, the gates were closed as Durga and her demons arrived to consume the offerings.

Against expectations, Bali currently has been largely spared from the epidemic. Let’s hope that the preventive measures that are being taken all over the island work and that the deities and demons remain satisfied with the offerings and rituals!

Photographers
Garrett Kam, the main photographer and the storyteller of this series, is from Hawaii and has lived in Bali since 1987 where he studies ritual art. Additional photos were taken by Gusti Putu Sudharta, a puppeteer and dancer and Ni Komang Sutini, a housewife. Fore more photos on this topic see the link https://bit.ly/3bXT8gq 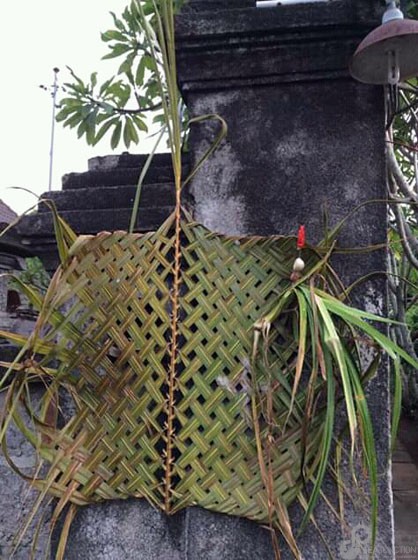 A more elaborate amulet includes a figure plaited from a coconut frond to confuse demons with many openings. (Photo by I Gusti Putu Sudharta) 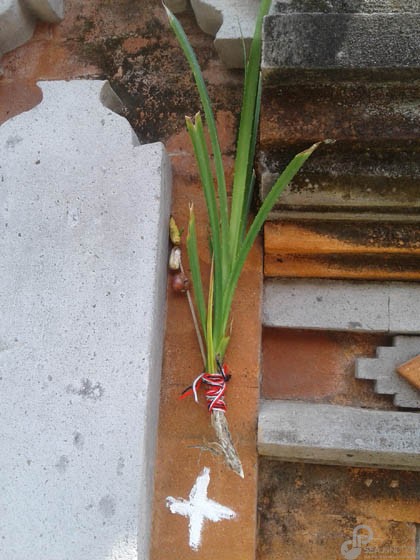 Some amulets include a small thorny pandanus plant. (Photo by Garrett Kam) 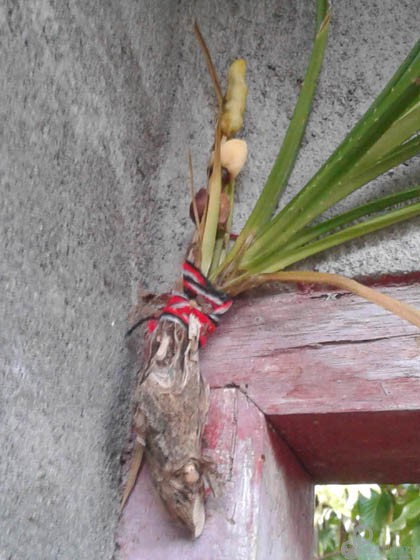 An amulet is fixed to the upper corner of a door frame. (Photo by Garrett Kam) 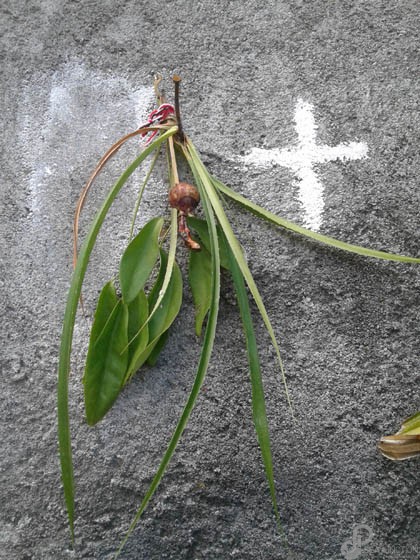 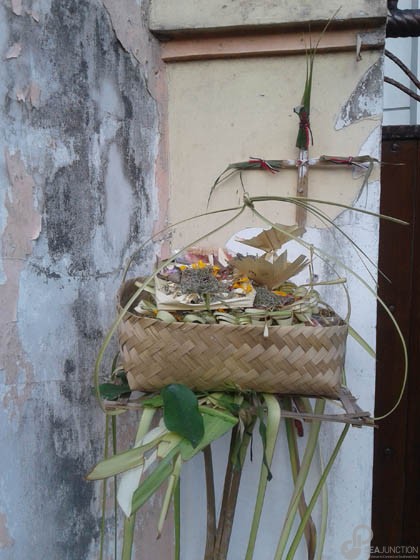 A bamboo basket filled with offerings in front of the bamboo cross. (Photo by Garrett Kam) 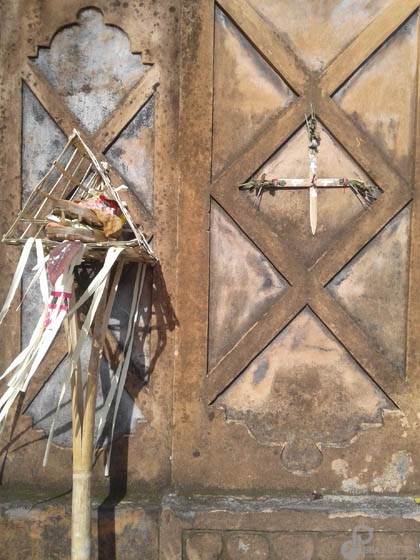 A bamboo cross is placed in a decorative wall with offerings next to it. (Photo by Garrett Kam) 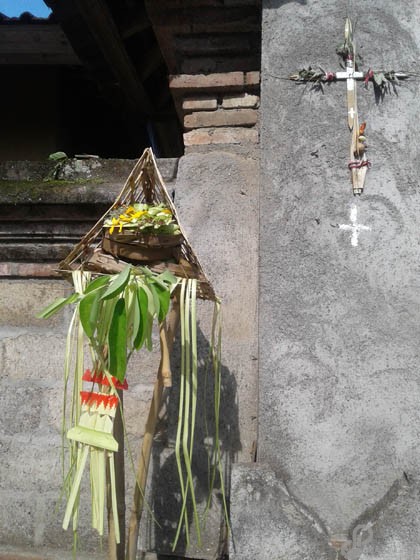 A bamboo cross with skewer of onion, garlic and chili along with altar of offerings outside a housegate. (Photo by Garrett Kam) 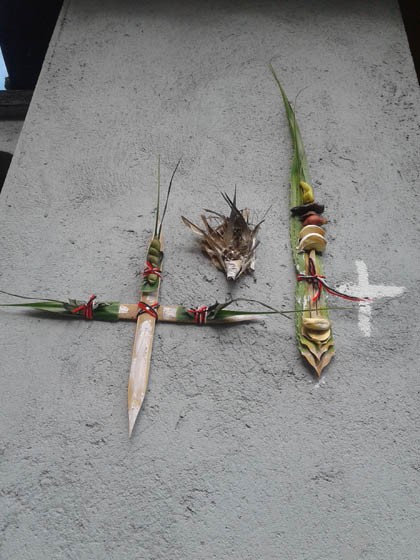 A set of 3 talismans add more protection from demons. (Photo by Garrett Kam) 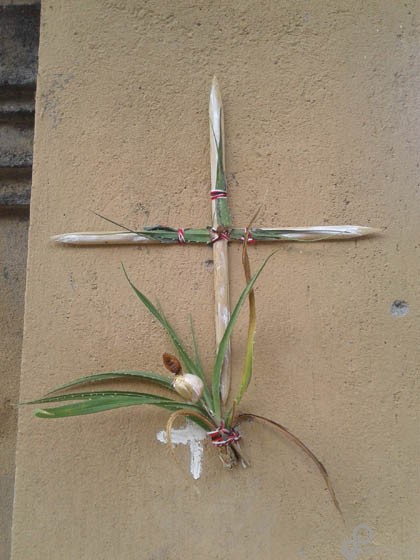 Bamboo cross and talisman against demons with a limestone cross keep demons from entering a household. (Photo by Garrett Kam) 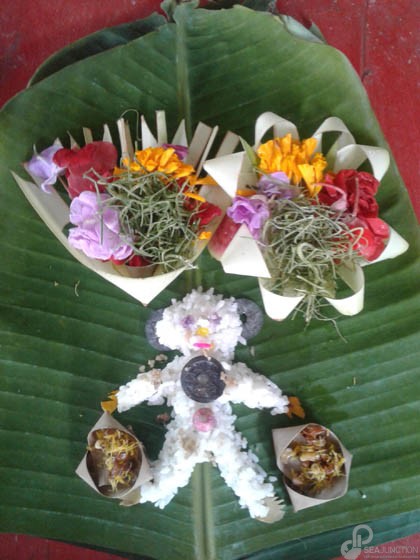 A white rice figure was placed in the household temple for Shiva, god of reincarnation. (Photo by Garrett Kam) 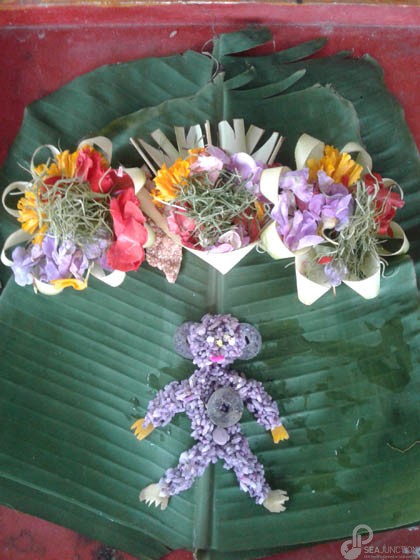 A purple rice figure was placed outside the housegate for Durga, Hindu goddess of disease and death. (Photo by Garrett Kam) 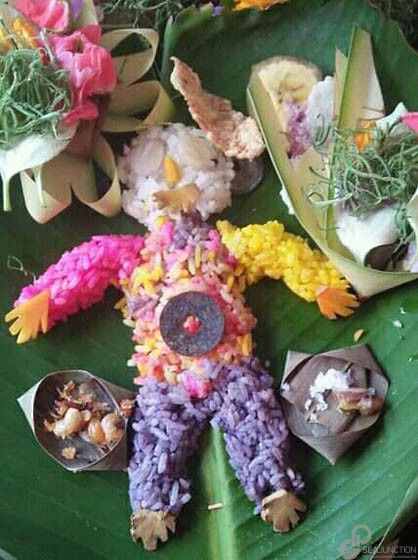 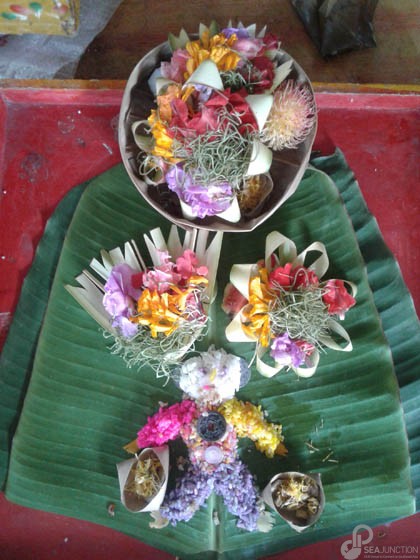 This figure was placed in the central yard of the household for mother earth Pertiwi. (Photo by Garrett Kam) 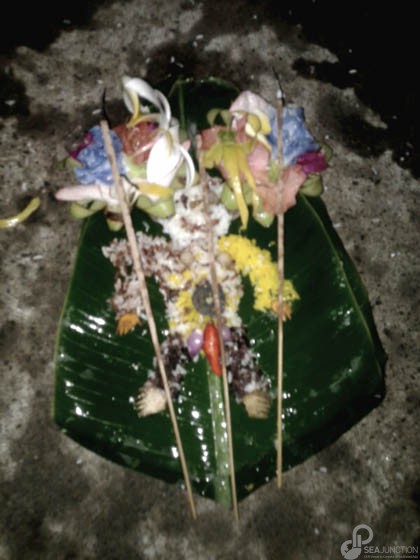