The Cambodian cyclo has become less popular as people these days are likely to use faster modes of transport. The pandemic has further worsened the livelihoods of three-wheel bicycle taxi drivers. With the major hit on tourism and with movement restrictions, they have earned much less than usual. A cyclo driver said “life now has gone back to zero. There are so few customers. People are afraid of COVID-19”. Another driver also added that “today I got only 1,500 riels (0.37 USD). When we used to have tourist customers, I could earn 3.75-5 USD per day”.

Most cyclo drivers are old and poor. Some are also homeless with greater risk of disease infection and other hazards. Living on the streets of Phnom Penh, their lives depend on much reduced income and food or cash donations from generous people, without sufficient assistance from the officials. They also receive and at the same time deliver donated food from cyclo community pantries — an initiative started by civil society groups. With the slogan “take what you need, donate what you can,” the mobile food cabinet is put on the vehicle and carried around. Food is distributed to anyone in need while those who can afford it can donate food for the others. Despite these efforts, the help cannot not reach all and many are left behind.

After learning of their adversities, we felt moved to highlight the story of the cyclo drivers and as artists we found ways to do so through rap music along with traditional dance. We combined together our different skills so as to make it attractive and interesting. Sang Sok Serey composed and sang the rap rhymes in collaboration with other rap singers: Khmer Klan, Nentum and Pou Chhiv. She also asked cyclo drivers to be a part of the performance at the end of the song. Taken together the sentences of the drivers, they became genuine rap lines as the examples below show:

When the nights come,

our fates are not the same.

The older we get,

we shall be able to rest happily.

However, we are vulnerable,

work hard all the time.

There is no time to rest,

Meanwhile, in the music video, Chanborey Soy performed Lakhon Khol or Khmer masked theatre performance. The giant character, he portrayed, symbolizes the wealthy and powerful persons. It implies that those who have resources can help and support the drivers by taking rides and standing by side with them.

Just a night before shooting day, the lockdown was imposed. We however managed to continue with a smaller scale performance and fewer people on set to comply with the restrictions. The shooting, including editing, was primarily spontaneous and free-style although we had a rough plan in mind. At the end, it was fun and the cyclo drivers were very happy to join us. They were also excited to see Lakhon Khol live performance for the first time. They may have seen it before on television or in the media but they couldn’t afford the ticket and it’s not easy to find the free public show.

We hope our song and performance could draw attention to the impact of COVID-19 on the lives of these cyclo drivers. Following the release, we have received positive feedbacks. The audiences have shown signs of empathy towards these drivers and some artists produced creative artworks, such as by Ren Khun and SDD Art, imagining the fate and future of cyclo. Not only we need to support the drivers but also to save the cyclo from extinction.

Sang Sok Serey is a female rapper from Phnom Penh. She is also an independent artist, content creator, song writer and performance artist.

Lattapol Jirapathomsakul is Program and Communication Officer at SEA Junction.

All authors are regional representatives 2021-2022 at Mekong Cultural Hub (MCH) and the song including music video production was supported by MCH under Creative Action project in Cambodia.

“From Fear to Resilience: Visual Storytelling of COVID-19 in Southeast Asia” is a special initiative of SEA Junction supported partly by the China Medical Board (CMB) Foundation to promote an alternative narrative of survival, resilience and solidarity. We are asking for short stories in the form of photo essays, short documentaries and illustrated art essays in any language of Southeast Asia (to be later translated into English) or in English. For more background and other stories click here. 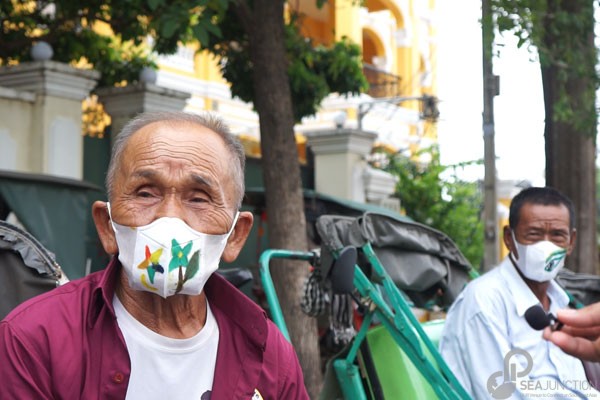 A cyclo driver telling how the pandemic has an impact on his life. (Photo by Voch Beat) 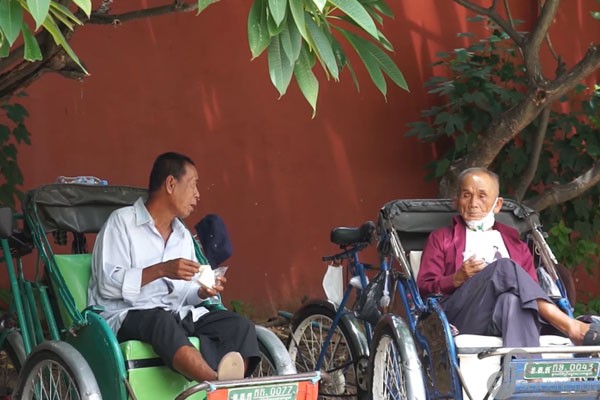 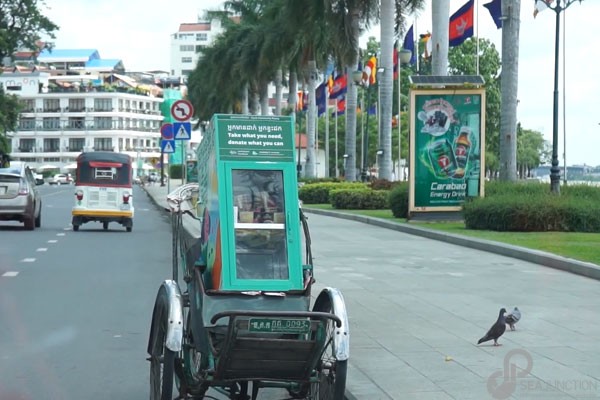 The mobile food pantry on a cyclo is being carried around with the writing, “take what you need, donate what you can”. (Photo by Voch Beat) 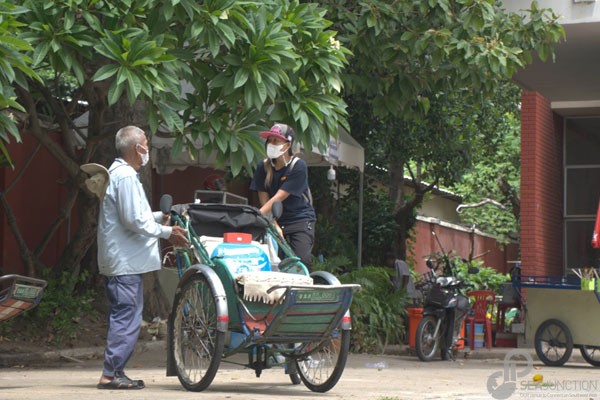 The rap artist Serey interviewed a cyclo driver and asked him to be a part of her song. (Photo by Voch Beat) 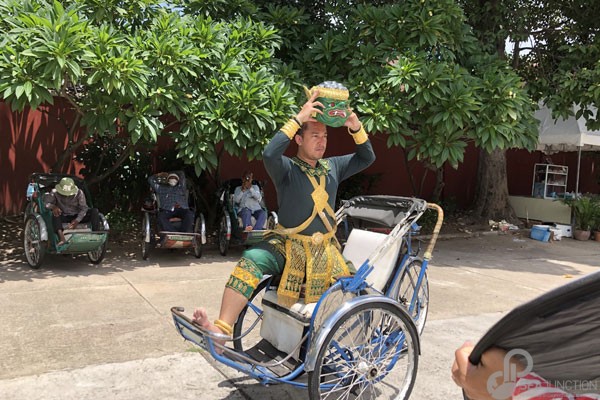 Lakhon dancer Borey put on the giant mask. He didn’t wear a full costume so as to be able to dance on the cyclo. (Photo by Voch Beat) 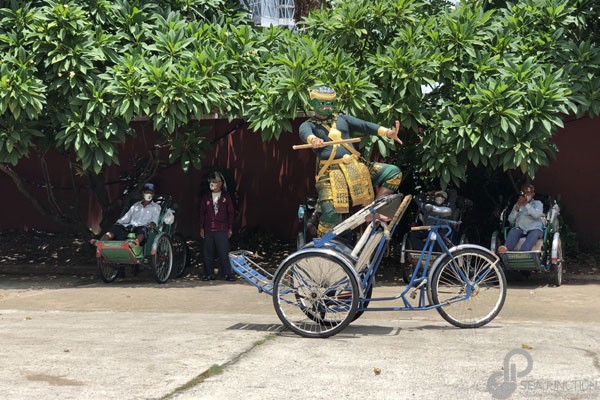 Lakhon dancer Borey danced on a cyclo. He found it very difficult to balance his body. (Photo by Voch Beat) 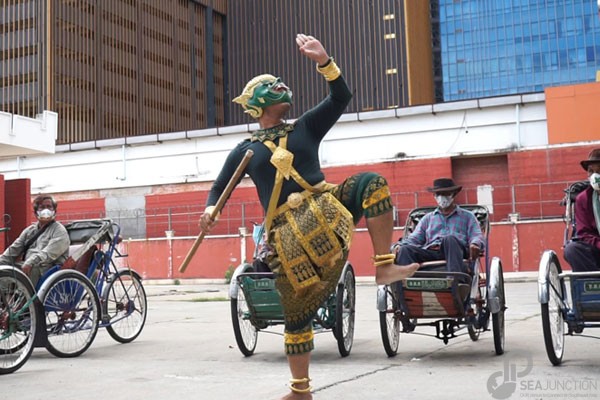 It was the first time for these drivers to see a live performance. (Photo by Voch Beat) 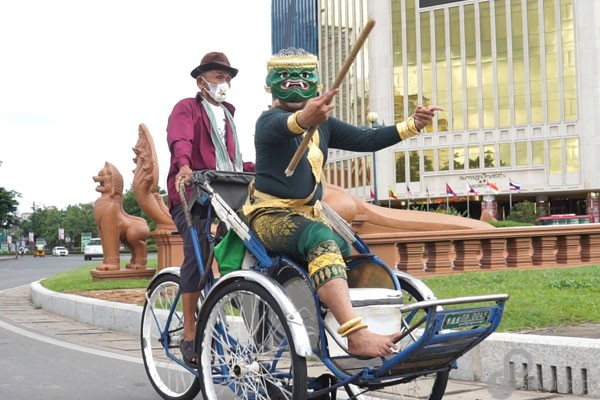 A cyclo was driven around on the street of Phnom Penh. (Photo by Voch Beat) 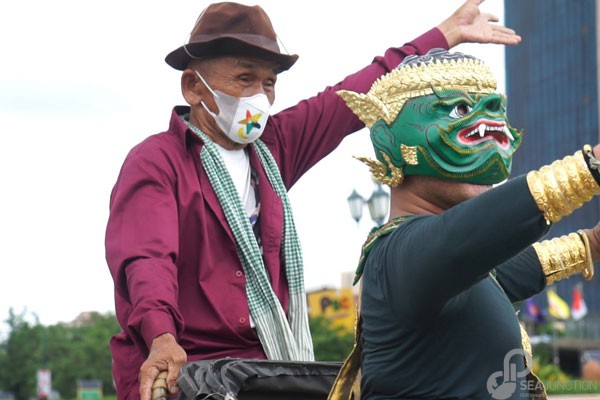 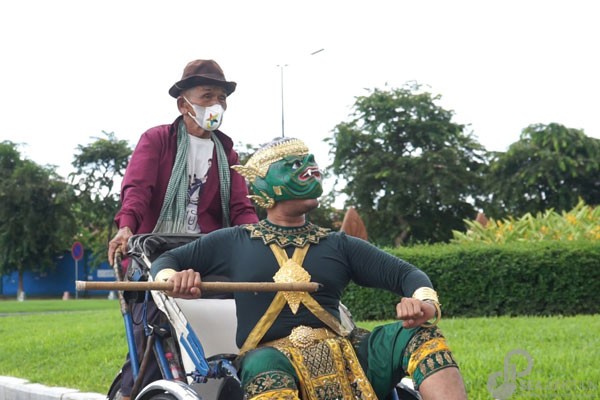 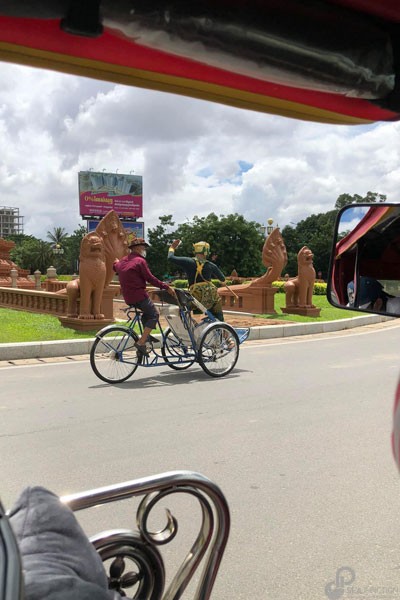 The video was shot from another tuk-tuk. (Photo by Voch Beat) 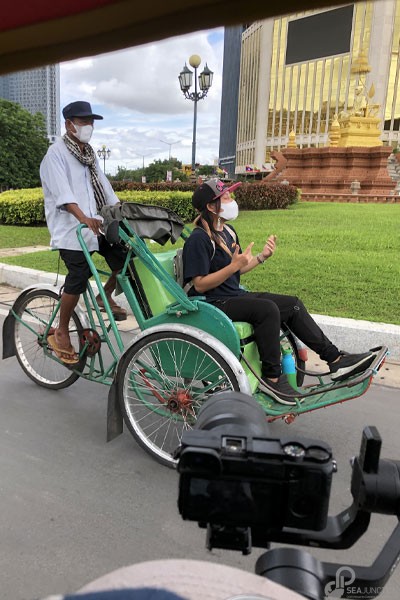 Serey rapped on a cyclo. (Photo by Voch Beat) 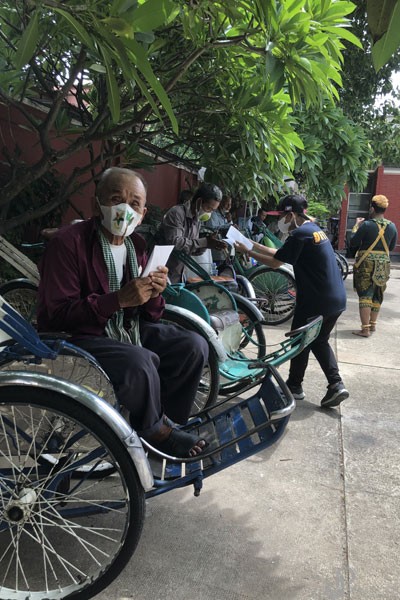 The cyclo drivers were excited and happy to join the project. (Photo by Voch Beat) 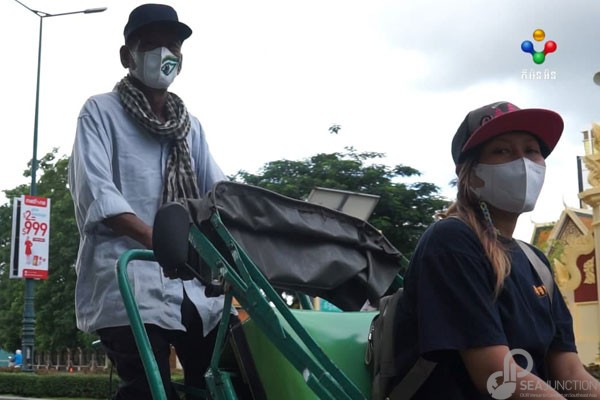 The song was featured on PNN News, read in Cambodian here 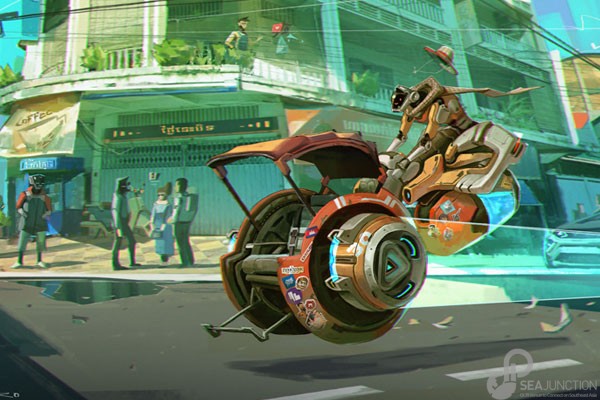