No Way Forward, No Way Back for Migrants in Chiang Rai

Art essay for the Special Initiative “From Fear to Resilience: Visual Storytelling of COVID-19 in Southeast Asia” by SEA Junction and Partners.

After the border was closed in March 2020 onwards, I joined the Aid Coordination Center for Migrant Workers in Chiang Rai, established by Mae Fah Luang University in collaboration with civil society organizations. The Center’s volunteers were composed of Burmese migrant workers, ethnic groups, academics, lawyers and staff from both non-profit organizations and government agencies. In the fieldwork, drawing was interesting as it could help me relax myself and also tell the stories without invading others’ privacy. The drawer could express personal feelings into the portraits. It was a better tool, in my opinion, to capture feeling than the photograph which gave more sense of reality. I put together lines and watercolor into the stories of migrant workers who could find no way forward and no way back. The borders of both home and host countries were closed. They were not able to get back to their home country. Meanwhile, the host country didn’t recognize their existence because they were unemployed.

Portraits of Others in Our Land: we are in fact migrants in our own home

Portraying the lives of migrant workers was not the depiction of colorful shape and figure in art traditions, but rather of emotional experience in entering into the identities of people encountered. The portraits were not Burmese migrant workers, but instead a reflection of a drawer who oneself became a migrant worker. While portraying these, I found myself becoming a migrant worker in my own land because, given the government’s measures, we faced the circumstance of becoming otherness in the homeland. The COVID-19 crisis has revealed the power sphere imposing restrictions and limiting our human condition in the name of the state system. This was no different than what migrant workers usually face in normal situations.

At the time, there was less or even no work to do because of the disrupted service sector and reduced constructions but migrant workers were hopefully waiting to get back to work full-time. Leisure could provide them with a little happiness. They spent free time planting vegetables, cooking what they could afford without buying, preserving food and making snacks such as Laphet tea salad. A migrant woman said she only slept when she had no work but I saw that she didn’t have much time for that as there were chores for her to do all the time.

Some migrant workers also volunteered at the Center in the evening until night. The volunteers took a survey on the pandemic impacts, constantly checked the temperature and interviewed symptoms (if any) of its members and then reported to the Center. Along with other observations combined, it was to monitor the infected cases so the help could reach on time. Organizing the volunteers to help one another in the migrant communities was a good start with potential to become stronger networks in the future.

At the End of the Rainbow

The hope of migrant workers is like the hope of all workers. They want to work not only to sustain themselves and the lives of family. Although income might be the first priority, there must be other elements such as stability and more. In the middle of the crisis, all workers have faced somewhat similar adversities but migrants have been particularly vulnerable. They lost jobs and got stuck in the working area.

The last set of sketch drawings highlights hope, belief, faith and identity of the migrant workers. It is entitled “The End of the Rainbow,” where they take the journey to. When they reach such a location, they will find the abundant treasures. It was inspired when I saw where the workers habited. It was composed of leftover materials from construction. The wooden wall was painted with the sun and a rainbow whose ending was missing. The question is whether there’s actually no treasure at the end or we have to continue looking for it.

Pollavat Praphattong is Assistant Professor at the School of Liberal Arts and Head of Mekong Basin Civilization Museum, Mae Fah Luang University. He drew, painted and told the story of migrant workers in Chiang Rai.

Suebsakun Kidnukorn is Researcher and Manager of Area-based-Social Innovation Research Center, Mae Fah Luang University. He is responsible for the coordination, connection, project design and implementation at the Center.

Chuchart Jaikaew is Administration Officer at the Mekong Basin Civilization Museum of Mae Fah Luang University. He specializes in Mekong local languages and helps to communicate with the locals.

This story is published with the permission of Dr. Pollavat Praphattong. It is a translated and shortened adapted version of the article “The Others in Our Land: we are in fact migrants in our own home” which is a part of the online exhibition entitled “No Way Forward, No Way Back — Just Surviving is Tough” by Mekong Basin Civilization Museum. More information at https://museum.mfu.ac.th/. ­­­­­­

“From Fear to Resilience: Visual Storytelling of COVID-19 in Southeast Asia” is a special initiative of SEA Junction supported partly by the China Medical Board (CMB) Foundation to promote an alternative narrative of survival, resilience and solidarity. We are asking for short stories in the form of photo essays, short documentaries and illustrated art essays in any language of Southeast Asia (to be later translated into English) or in English. For more background and other stories click here. 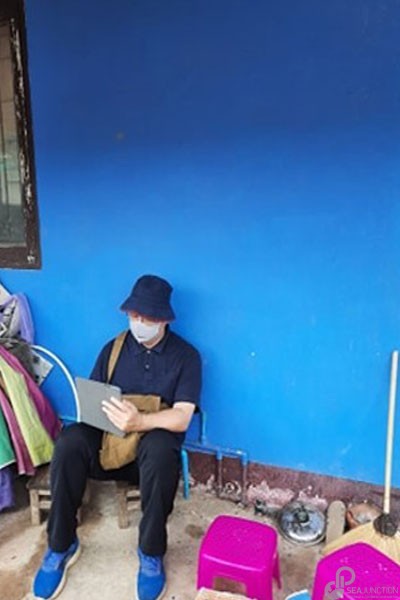 While portraying, the drawer realized how he became like a migrant himself. (Photo by a Burmese migrant worker) 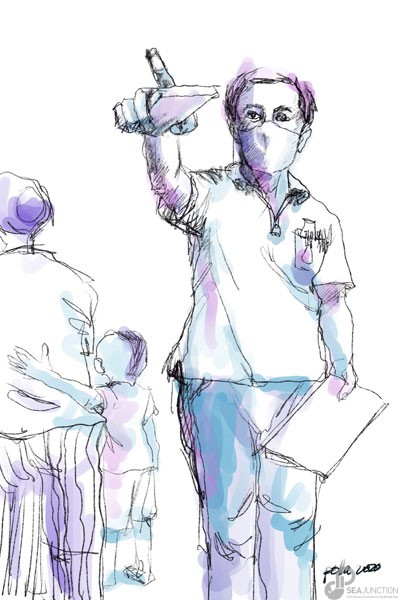 A lead coordinator who is a university researcher facilitated the Center’s overall operation. (Portrait by Pollavat Praphattong) 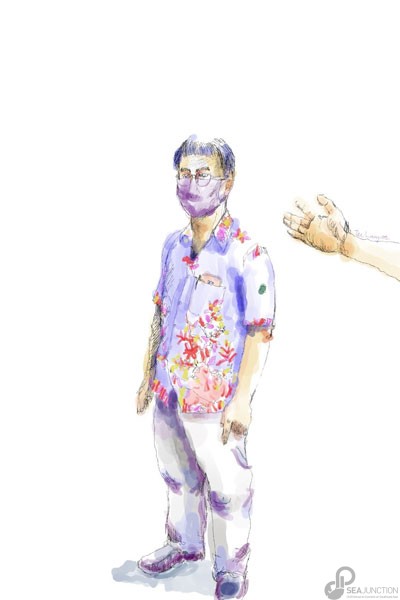 A lawyer provided legal assistance to migrant workers at the Center. (Portrait by Pollavat Praphattong) 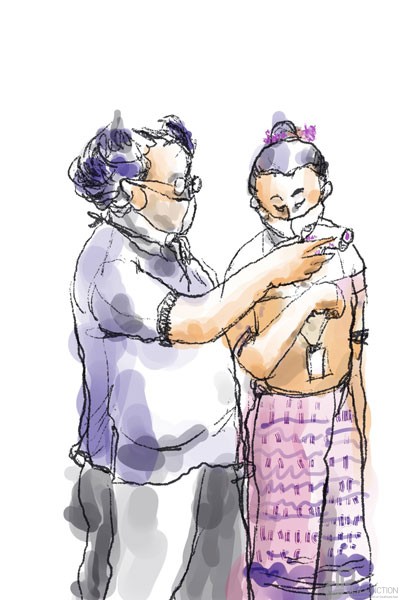 Fr Vinai Boonlue SJ from Xavier Learning Community was a force behind the operations. (Portrait by Pollavat Praphattong) 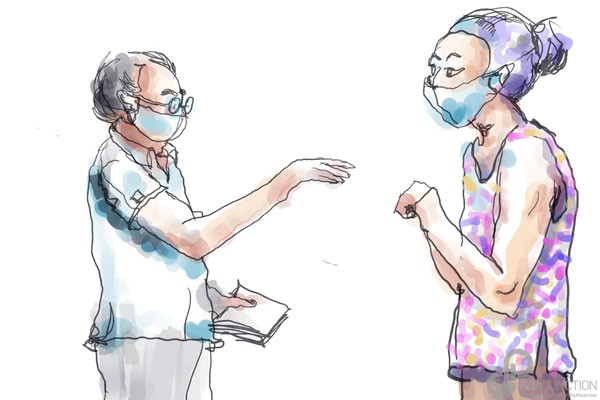 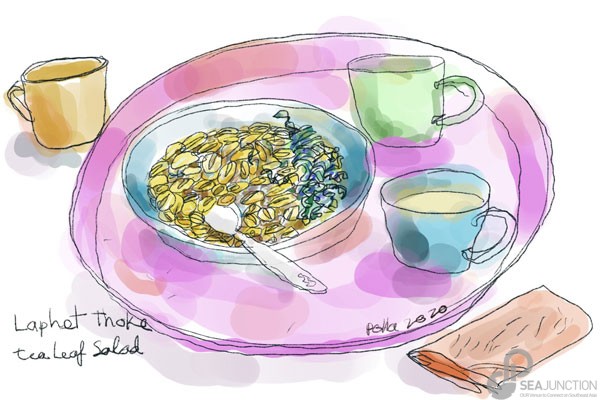 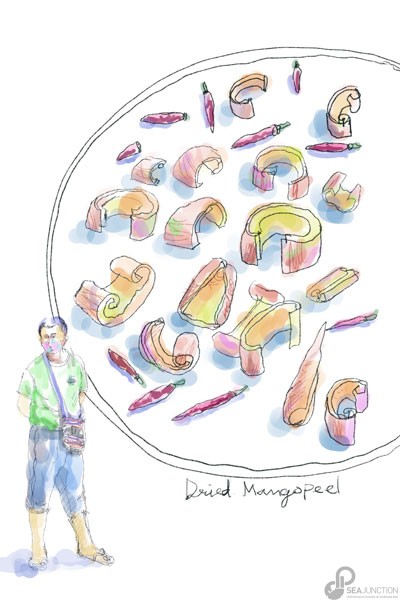 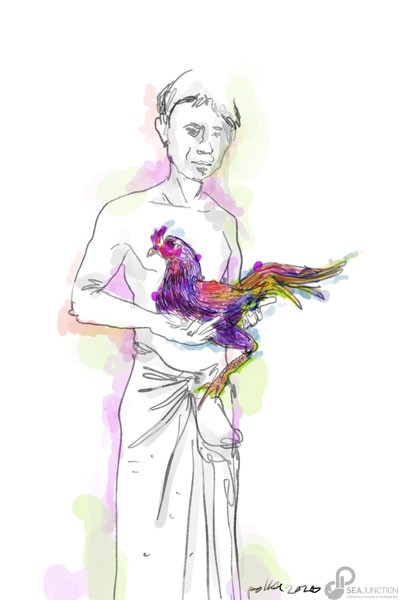 He had more time feeding his gamecock as he worked every other day instead of every day. (Portrait by Pollavat Praphattong) 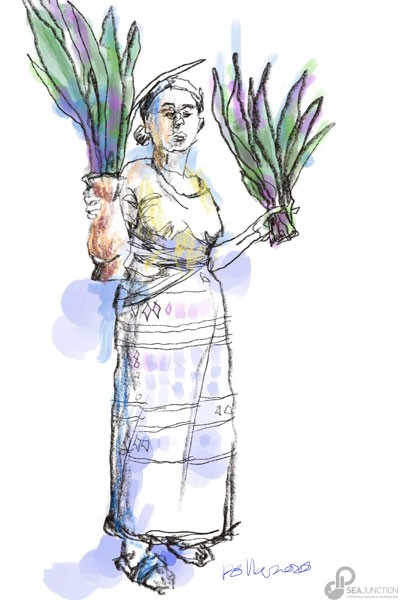 She changed the water in the vases of Betel leaves to worship the Buddha statue everyday. (Portrait by Pollavat Praphattong) 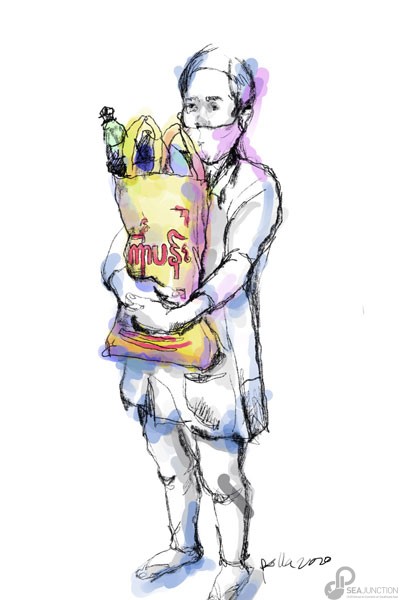 Bag containing donated items had the Burmese language, showing the attachment to the homeland. (Portrait by Pollavat Praphattong) 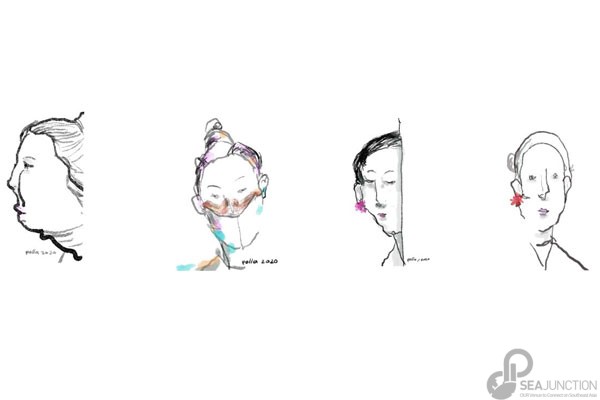 Women migrant workers played a crucial role in leading and volunteering at the Center. (Portrait by Pollavat Praphattong) 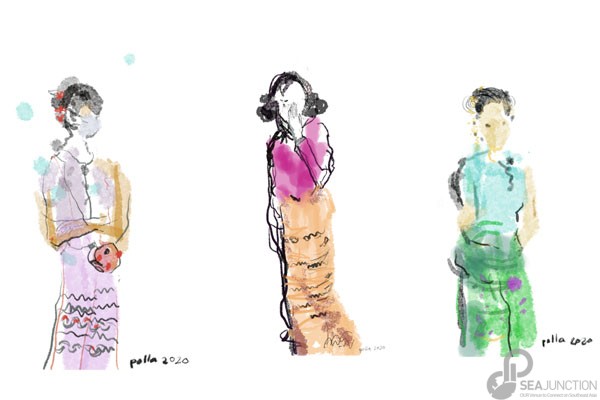 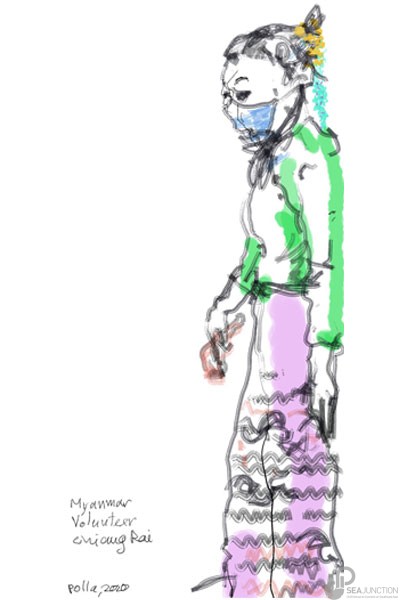 Migrant woman who volunteered as an instructor always wore the national costume. (Portrait by Pollavat Praphattong) 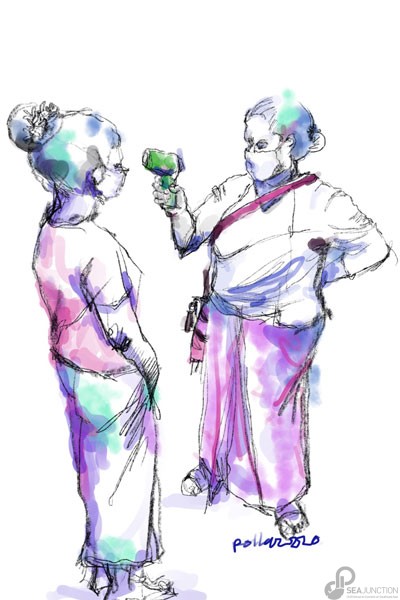 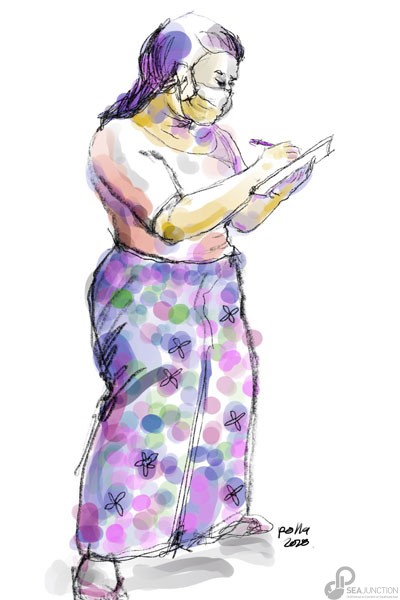 Taking note of the information on unemployment and needs was very important to be able to address the issues. (Portrait by Pollavat Praphattong) 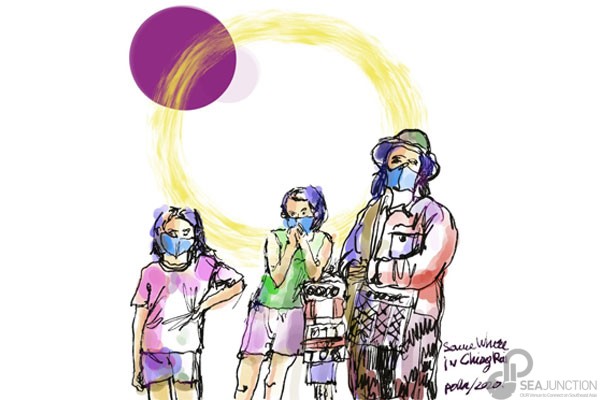 Masks were essential but not accessible among migrant workers, especially those who lost their jobs. (Portrait by Pollavat Praphattong) 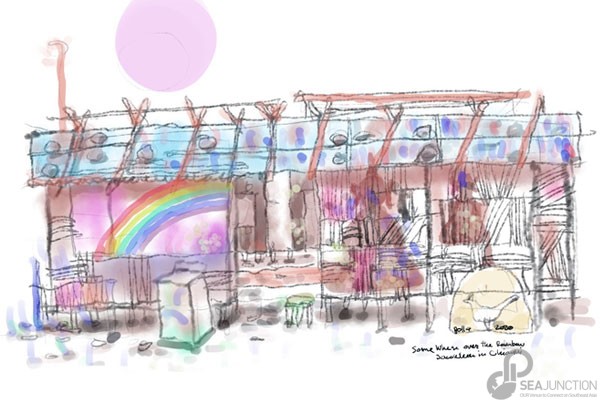 At the End of Rainbow, title of the last set of portraits. (Portrait by Pollavat Praphattong) 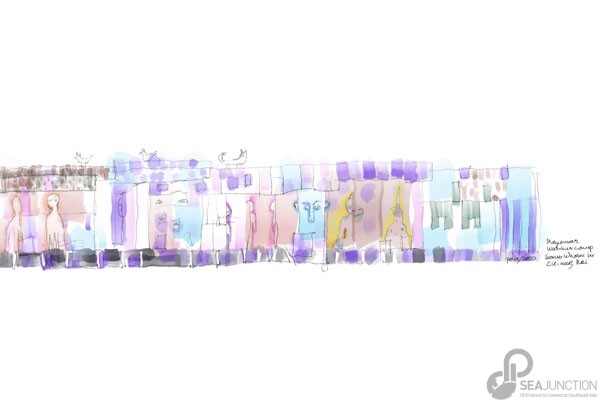 Traces of hope were on the wall. A set of numbers might be important telephone numbers or anything only understood among them. (Portrait by Pollavat Praphattong) The identity was shown through Thanaka applied on their faces. (Portrait by Pollavat Praphattong) 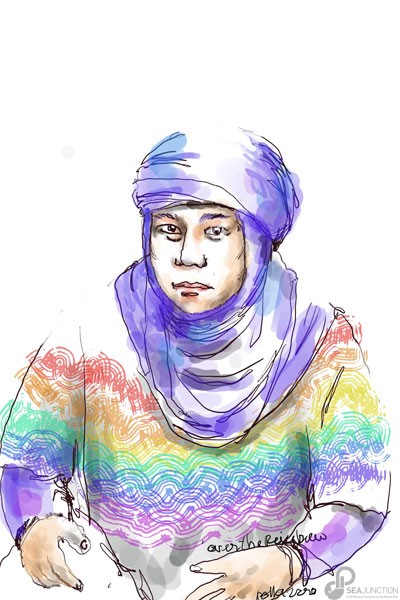 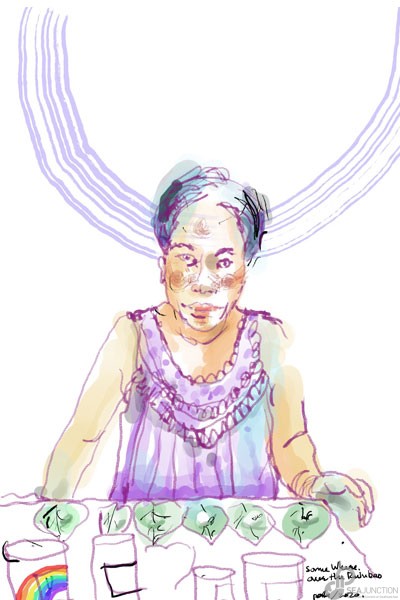 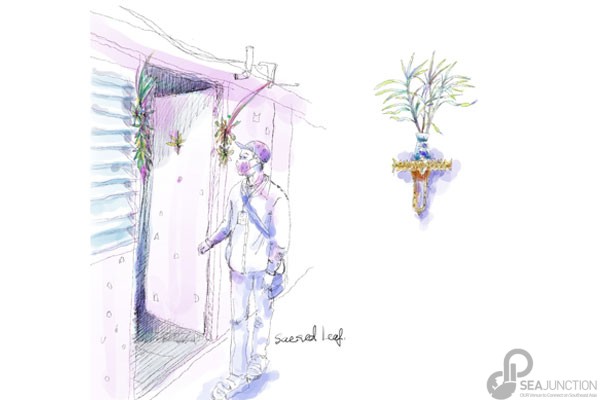 Holy leaf was hung in front of the door to prevent the danger and an altar was found inside the room. (Portrait by Pollavat Praphattong) 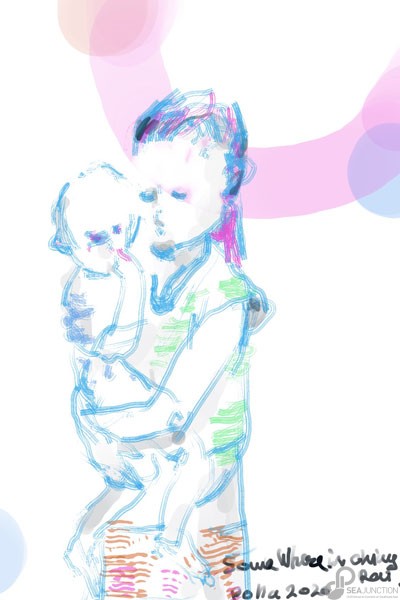 Migrant woman and her baby were traveling in search of the rainbow’s ending but got stuck because of the pandemic. (Portrait by Pollavat Praphattong)