Bangkok’s First Pride Parade in Over a Decade

Considered the second biggest pride parade in Southeast Asia after the Philippines’ Metro Manila Pride, the Bangkok Naruemit Pride Parade in Thailand took place on 5th June 2022. Marking the capital city’s first proper pride parade in nearly 16 years, the route started from Sri Maha Mariamman temple to Silom Road. The lesbian, gay, bisexual, transgender, queer, intersex, asexual and non-binary (LGBTQIAN+) community, together with the allies and people of all genders, gathered to show pride and support in sexual and gender diversity as well as advocate for many social causes. Civil society groups, activists, members of some political parties and Bangkok’s newly elected governor also took part in the march.

Pride parade is also a protest. Among demands made during the event were an end to gender-based violence and discrimination, a change in name titles and the decriminalization of sex work. Taking place at a time when the draft marriage equality bill was still pending in parliament after being repeatedly pushed back by the Thai Cabinet, the parade was also a strong advocate for the right to marry. Following the event, in mid-June, the House of Representatives approved three related draft bills on marriage equality and civil partnership in their first reading. Some people however share a concern that civil partnership is no substitute for marriage equality because it doesn’t provide equal legal rights and is thus a compromise for equality. With different details in each draft, it’s critical to keep an eye on the next process and final details before the law becomes effective.

The pride parade demonstrated the community’s growing public support, which should continue beyond pride month. Despite this support and seemingly increasing positive perception toward LGBTQIAN+ persons in Thailand, many of them are still not treated equally nor granted certain rights by the law. Marriage equality bill is in the parliamentary process, trans person’s gender identity is not legally recognized, homophobic bullying happens in schools, economic discrimination persists and many more struggles are faced. There is still a long way to go and public support must be sustained year-round.

Lattapol Jirapathomsakul, known as Bom, is Program and Communication Officer at SEA Junction. His interests lie in gender, art and culture. He enjoys street photography as a hobby capturing candid moments of random subjects or objects, often from a distance. 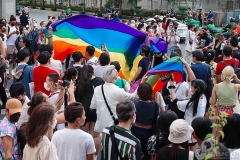 A large pride flag was hoisted 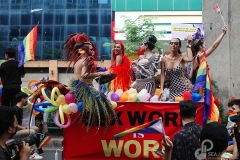 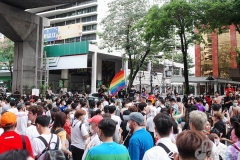 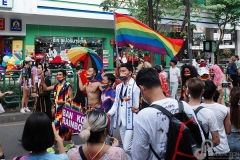 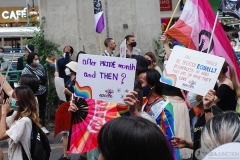 “After pride month and then?” 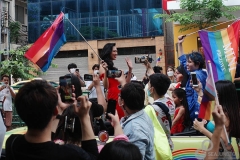 A celebrity joined the pride parade 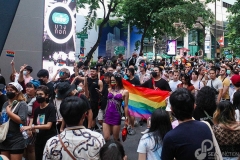 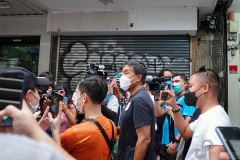 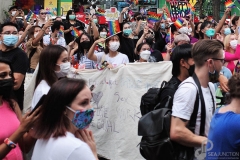 The crowd reacted to
Chadchart's arrival 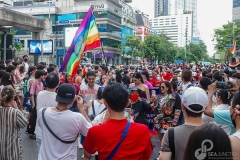 The members of a political
party joined the parade

A couple married at the pride parade 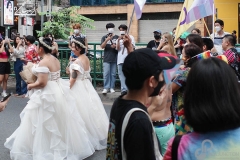 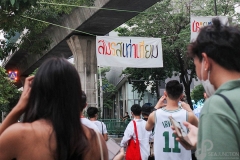 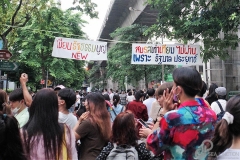 The banner says the marriage
equality bill hasn’t been passed 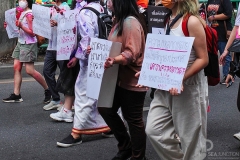 "[Gender] diversity is not
the country's enemy. Respecting
diversity is the path to bliss" 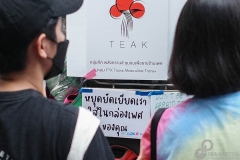 "Do not forcibly put us
into your gender box" 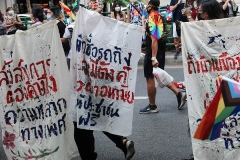