Talismans to guard against COVID19 in Bali, Indonesia

This series portrays the communal use of traditional talismans and amulets to repel COVID-19 in Bali, Indonesia. One of the simplest type of ritual action taken to combat plague is called tumbal penolak mala (amulet to repel evil; see photo 1-4 taken on 26 March 2020). A skewer of purple shallot, garlic, and red chili is tied with strings repeating these black (purple), white, and red colors onto three leaves of thorny pandanus leaves that demons fear. Limestone paste used for betel chew is smeared on the leaves or made into a cross shape. This amulet is nailed on the outside of the house gates.

Tapak dara gesing (bamboo cross) marked with limestone is an additional talisman to prevent more powerful forces from entering a household and causing illness. On 4 April 2020, bamboo crosses made of leaves from three different protective plants and tied on with tricolor threads could be seen hanging on houses. An altar held a pejati offering to the Hindu goddess of disease Durga, informing her of the need to stay away. This ritual took place at sunset after which everyone went inside their households and gates were shut so that Durga and her demons could partake in the offerings (see photos 5-9).

Segehan is an offering placed on the ground to distract demons. Nasi wong-wongan mancawarna (multi-colored human shaped rice figures; see photos 10-14) are substitutes for real people during the corona virus crisis. Following simple rules led to creativity in a flexible system of beliefs. White for the head symbolizes pure thoughts. Red for the right arm represents action, while yellow for the left arm shows honor. Black legs symbolize stepping over evil. While the figures usually are androgynous, some of them have exaggerated male genitals as additional ways of frightening away demons. They are placed on two banana leaves as food would be served (see photos 10-14 taken on 2 April 2020).

Garrett Kam, the main photographer of this series, is from Hawaii and has lived in Bali since 1987 where he studies ritual art. Additional photos were taken by Gusti Putu Sudharta is a puppeteer and dancer and Ni Komang Sutini, a housewife. 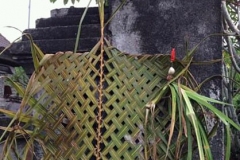 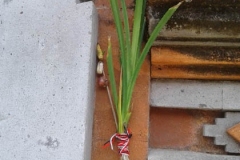 Some amulets include a
small thorny pandanus plant. 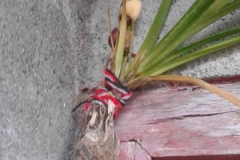 An amulet is fixed to the upper
corner of a door frame. 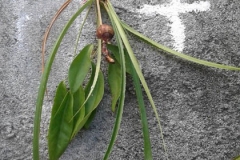 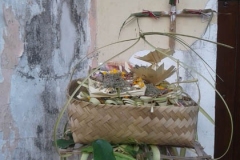 A bamboo basket filled with
offerings in front of
the bamboo cross. 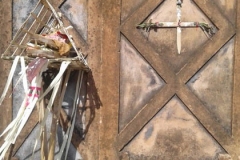 A bamboo cross is placed
in a decorative wall with
offerings next to it. 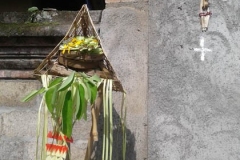 Bamboo cross with skewer of onion,
garlic and chili along with altar
of offerings outside a housegate. 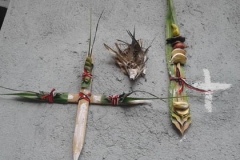 A set of 3 talismans add more
protection from demons. 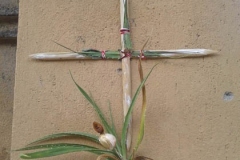 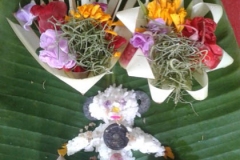 A white rice figure was
placed in the household temple
for Shiva, god of reincarnation. 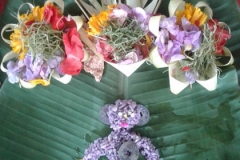 A purple rice figure was placed
outside the housegate for Durga,
Hindu goddess of disease and death. 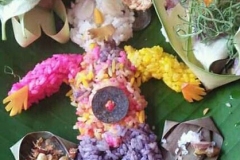 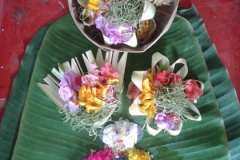 This figure was placed in the
central yard of the household
for mother earth Pertiwi. 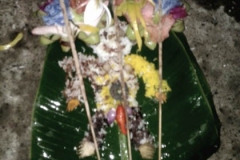