The Phuket Vegetarian Festival is a unique interpretation of the Nine Emperor Gods Festival celebrated by Chinese diaspora throughout Southeast Asia. One of its main attractions is piercing practiced by mediums who are believed to be possessed by spirits of minor deities and therefore not to experience fear nor pain. The mediums, called Ma Song, can be both male and female, but female mediums are less common and they mostly use smaller skewers. Although there is a serious religious tradition behind the Nine Emperor Gogs festival, many participants are, at the same time, eager to express their own creativity by choosing rather unusual things to pierce their cheeks with. That said, not all the mediums necessarily do piercing, with some just walking in the procession in a state of trance and/or ride open trucks giving blessings along the way. Each medium is surrounded by the group of helpers, carrying the statues of various gods, offerings, or taking care of the open wounds right on the way. Whereas processions involve numerous images of the deities, none of those should be mistaken for the Nine Emperor Gods who do not have any visual representation due to their high status in the celestial hierarchy. Another remarkable part of the festival involves sedan chairs carrying the figures of deities paraded through the streets with numerous firecrackers constantly exploding as gods are supposed to enjoy that.

Eva Rapoport was born in the Soviet Union and has lived and worked in Russia. She has studied and  then taught philosophy and cultural studies. In 2013 she moved to Southeast Asia and lived in Indonesia for almost 3 years before moving to Thailand where she currently lives. She is doing a master in religion studies and she has a keen interest in spirit possession rituals. 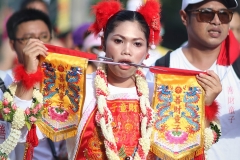 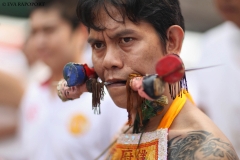 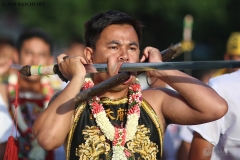 The most common objects for
piercing are either swords or skewers 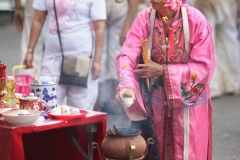 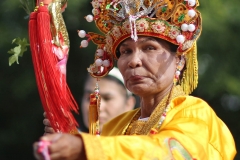 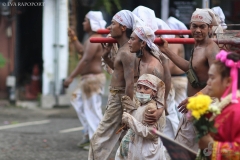 Carriers of sedan chairs with figures
of deities 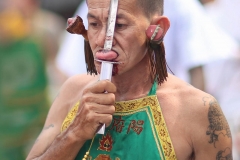 Tongue piercing is another option 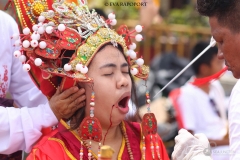 A healer performs a piercing procedure 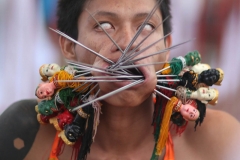 Transfixed by the deities 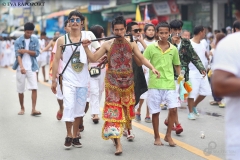 A medium and his helpers 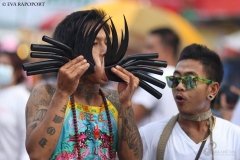 Piercing with blades of unusual shape 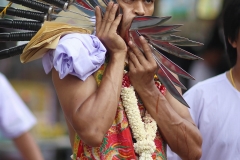 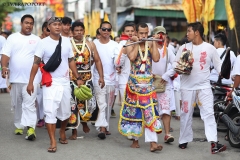 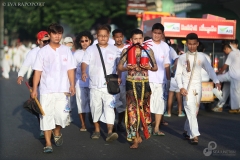