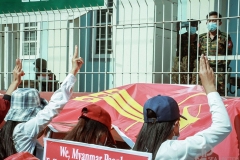 Police guard the streets of
Pyay during a cortege of nurses,
teachers, workers, and students